I have a lot of cases where a song is not recognized as a Composition.

What does it take to force a track to be a composition?

Here’s an example. This is an Identified album of various artists. Note that Otis Spann is both a performer and composer (tracks 3 and 4). Note the submenu does not show Go To Composition: 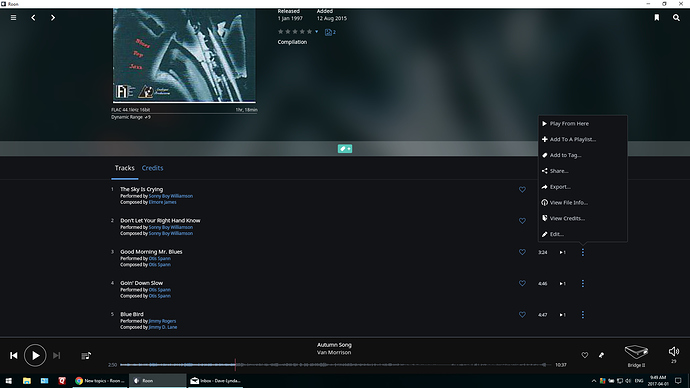 Within Otis Spann I have him as Performer but not as a Composer: 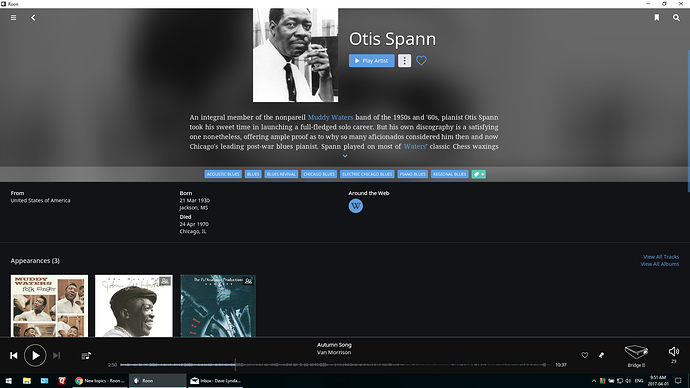 And these two tracks do not show up in Composition menu option.

Shouldn’t every non-classical track be a Composition? I’m great interest in who wrote what in my collection so not have every track as a Composition is an issue for me.

Note that my classical works are marked as Compositions from what I can tell. Also, I am not using Tidal at all,…all my collection.

Thanks in advance, Dave

Is there some trick to getting a track to show up as a composition under an artist
(Un)identified compositions
When is a Track(s) a Composition?
Tracks with NO composition
Roon not identifying duplicate tracks
joel April 1, 2017, 3:35pm #2

@David_Boyd Hi Dave. Under the hood, all tracks with composers are compositions and, indeed, you can view them in the Compositions browser (Menu --> Compositions). However, we’ll only give you a link from the Album Details page if either of the following apply:

1 Like
Belly of an architect
Searching for compositions: Is there something about the new Search that's still not quite right?
"go to composition" button not always there?
David_Boyd (David Boyd) April 1, 2017, 4:30pm #3

Joel: thanks for quick reply but on my Compositions browser 90% of my 24,000 entries have only 1 performance. I have sorted it by by Performance and note list cursor is near bottom. To your other Composition qualifier…I’m not sure Warren Zevon’s “Rub Me Raw” has rich metadata or that popular (unfortunately). 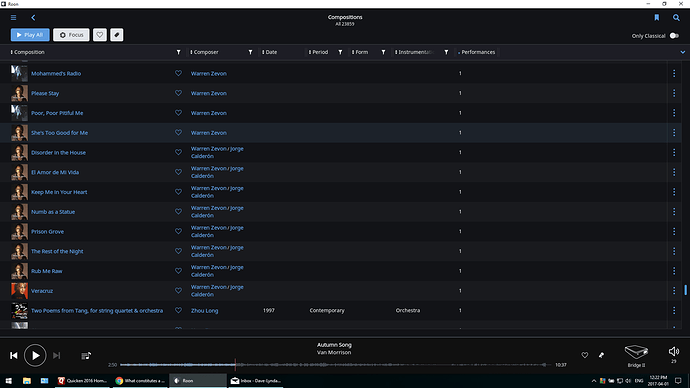 Maybe what might help me out is: from the Tracks browser be able to select multiple tracks and have them merged together into a “Composition”. That is is what started this whole thing…I have tracks that are orphaned from their Composition even though track title, composers, etc. match.

I’m not sure what you’re after. Did you digest this statement?

Joel: I totally understand the access point for Compositions. My problem is, and has been since initial posting, the orphaning of versions of songs that are not included in their composition. 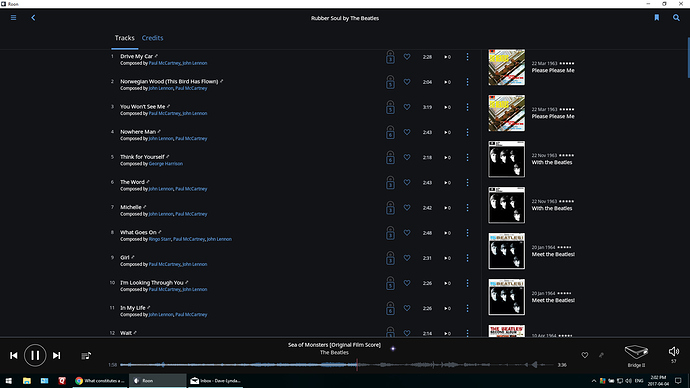 Now here’s the Capitol stereo version of same album. Note all the tracks that are not included in their composition. The same thing happens for the Capitol mono version as well. I have confirmed composer and title settings.
And what is also strange is that the sole George Harrison song is in its composition group. 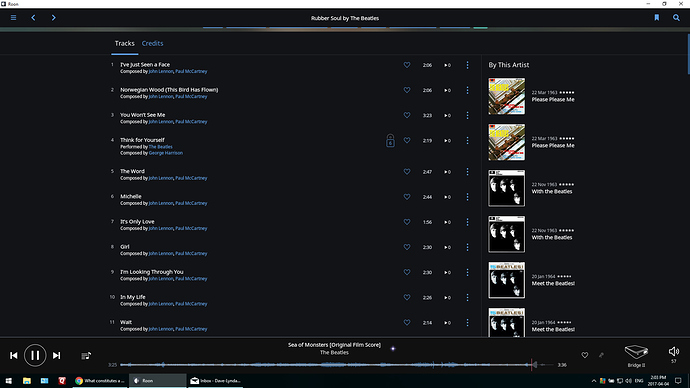 So, is there a way for me to manually select any one of these orphaned tracks and merge them into their composition group?

No, not at the moment. However, you may be able to get better results by selecting a different set of metadata (using the identification wizard) to the one that Roon automatically identified for you. There are many factors that determine which metadata set you get, including track timings and other metadata in your tags; we don’t always get it right.

In the future, we hope to have more consistent metadata across different releases.

Joel: thanks. Will keep plugging away at it.

Since 1.3 I’ve been going hardcore on filling in composers and compositions as the songwriter/composer is important to me.

I love what Roon has brought to the music via its metadata relationships. And it just keeps getting more solid. Thanks to the Roon team. I talk your product up to all that will listen.

Hey, @David_Boyd, I’m not sure if this is the same thing as you mean but there is a ‘Merge Compositions screen’.

I have a very similar problem to you. Classical seems to work well but Popular/Jazz not so. I have many orphaned performances just like you that I couldn’t seem to group however careful I was with title spelling, composers etc. A good example is ‘Stardust’ by Hoagy Carmichael. This must be the most covered song in popular/jazz history but in my library, performances do not group very well.

Eventually I just did a search on ‘Stardust’. If you scroll to the bottom of the screen that comes up there is a section ‘Compositions’. If you highlight two or more of these compositions then the option to ‘Merge Compositions’ flashes up. Maybe this is what you are looking for?

Tony: thanks but I know about Merge Composition…I’ve been wearing it out.

My problem is that I have an existing Composition (say “Hey Jude” with 3 version already in it) BUT I have a fourth “Hey Jude” that is not being included even though Composer and Title match the Composition. I need to be able to select that “orphaned” track and add it to the existing “Hey Jude” Composition. Just can’t do it

I have found a few of these scenarios (see my whole “Rubber Soul” above). Not the end of the world but could miss out when look via Composition. Would have to rely on Track search for these.

Thanks for replying, Dave

+1, Thanks for getting the conversation going David.

I noticed this most recently when I imported “Ladies and Gentlemen: Barenaked Ladies & the Persuasions” . This the current BNL + Pursuasions covering many previous BNL songs. The songs aren’t tied together in compositions with the songs on the original BNL albums.

Roon’s cross-linking and browsing is what sold me on the product. I’d love to see some more sophistication here.

I have the same observation and the same request as David.
One feature in Roon that I greatly appreciate is the possibility to see, for each track of an album, if I have other versions of these titles in my collection.
But, for identified albums, sometimes Roon doesn’t consider a title as a composition, and so doesn’t indicate whether I have other versions of this title.
When Roon doesn’t identify a title as a composition (and because of that doesn’t merge it to an existing composition of the same title), we should be able to associate this title to the composition manually. Can we expect to see this possibility added in Roon in the future?
Thanks,
Thierry

The problem still exists.
Here’s a screenshot of Stones album 12x5 showing composers for “Under the Boardwalk” but no “go to composition” 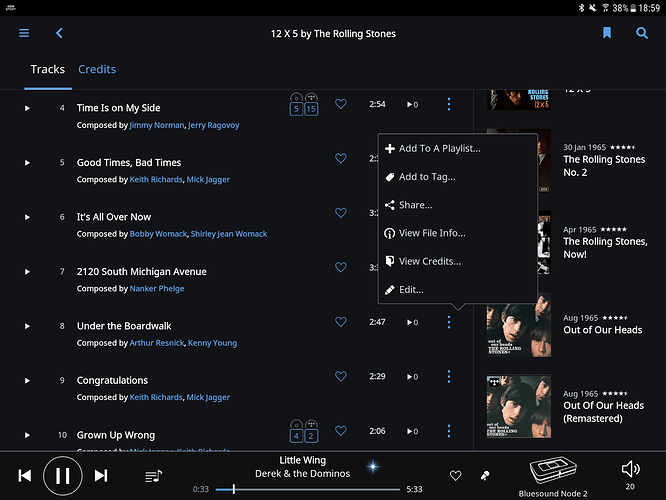 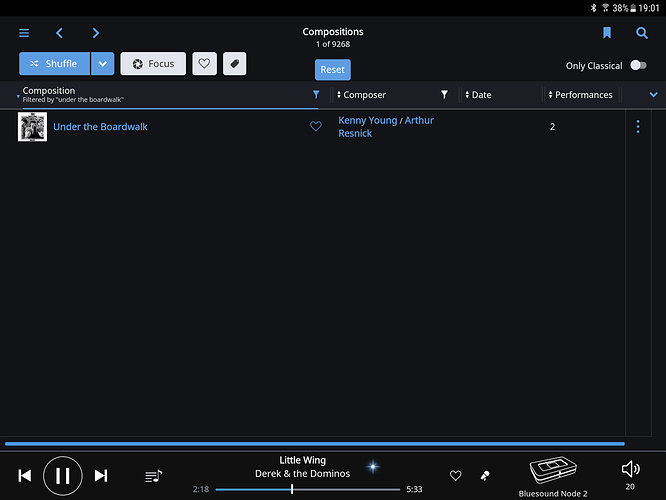 but I can’t merge them.

In case others come across this, it has been identified as a problem. Roon have stated…

Our theory is that it was caused by one of metadata services giving an information which Roon didn’t interpreted 100% correctly. So, now we have an opened ticket for the issue, and I hope our developer team will fix it

Editing track as being another performance of the same song/composition
"go to composition" button not always there?
BrianW (Brian) July 17, 2018, 8:31pm #15

Is this “opened ticket” still active? It is still a problem after more than a year. 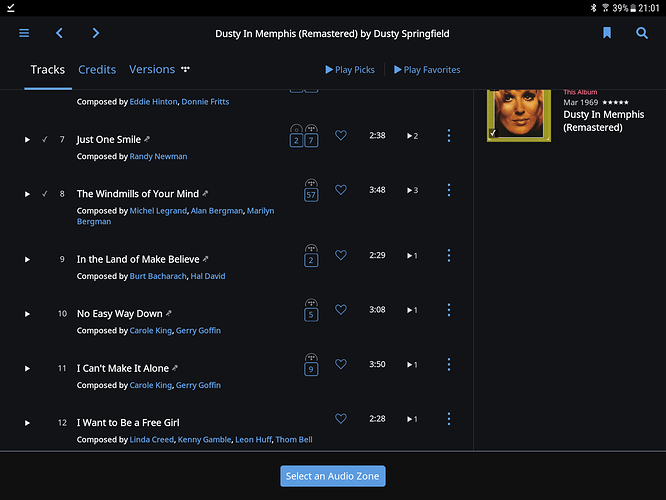 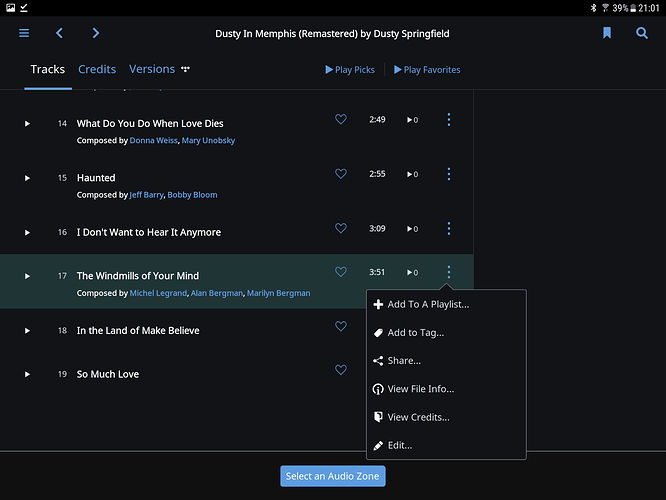 Track 17 is another version of track 8, but the metadata originally supplied no composers so I have manually added them. However, Roon refuses to recognise this as a composition.

As has been noticed by previous people on this thread, this is not an isolated case. I like to identify as many tracks as I can, and am forever tripping up over this: if the metadata only identifies some of the tracks, it is often impossible to turn the remaining ones into compositions. Sometimes re-identifying with a different version helps, but not always, and anyway, I shouldn’t have to resort to that.

Brian, can you clarify? It looks like we will have to compile our own knowledge base since Roon will not release its recognition logic.

Not getting the “associated” part or the “an alternative” part. Thx.

When identifying, via the three button edit, one can sometimes be presented with alternative versions/editions, e.g. 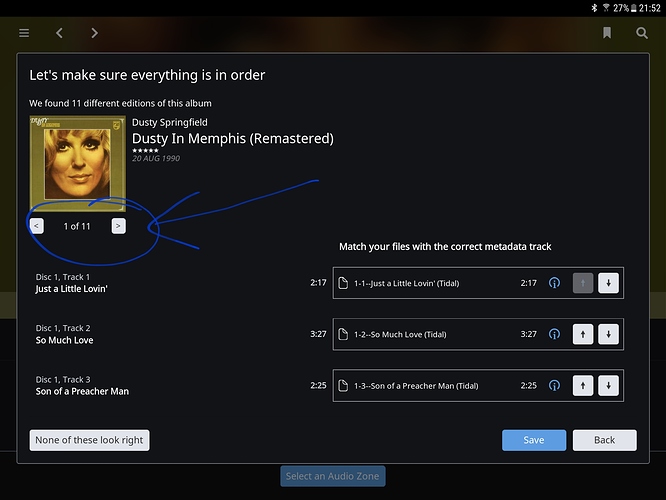 Some work better than others, but it’s a pain trying them all… I sometimes try the first 2 or 3.

Another trick I find that works is to copy the track title into the WORK tag. I don’t know why this would work for a single part composition like a pop song but you can try it. Most of us maintaining classical libraries will have WORK/PART tags already set up in our taggers but I don’t know how common that is for those maintaining primarily pop/rock or jazz albums.

It’s a lot of manual effort to edit title, composer and work tags so I only do this for favorite songs where I like to know where all my covers are. My personal experience is there is a lot of composition level gaps in pop/rock/jazz metadata.

Still a problem for me in the way as described a few posts up (What constitutes a Composition? - #15 by BrianW), in Roon 1.8.

I imported albums (one example: artist: “Neigungsgruppe Sex, Gewalt & gute Laune”, album: “Loss mas bleibm”, also others) that is in German and contains cover versions of well-known English-language songs. The import and initial credit edits were dome with 1.7. Now with 1.8 I proceeded to merge compositions but can only do so for some tracks.

Curiously, neither track had predefined composers in the Roon metadata. I added the composers manually into both of the tracks, but the result is not the same.

FWIW, today I added another German CD with cover versions of popular songs and with poor metadata, “Bourgeois with Guitar” by Kristof Schreuf. The songs had the original English titles but did not have composers in the metadata, and no “Go to composition” in the menus.

Either something changed for the better in Roon, or I was lucky, or I am starting to understand how this works. Or all of this.