Roon selects lossy files for playback when lossless are available - how to fix?

I’m a Roon user for 9 months and a Qobuz user for 1.5 years.
When I found a good discount for Tidal I used both for a while. Now I’ve downgraded my subscription to Tidal Premium, because I like Qobuz but want to get the benefit of an extended catalogue.

So in my case I’d like Roon to always play files from Qobuz if available. Instead, Roon seems to check the sample rate of all the available variants for an album and picks the highest one. If both Qobuz and Tidal offer the same maximum sample & bit rates then additionally it seems Tidal is chosen.

Thus Roon quite often plays lossy files for me when lossless are available. Really annoying.

Are there some settings I’ve missed so that this behaviour may be changed?

…Roon seems to check the sample rate of all the available variants for an album and picks the highest one.

This is by design … and should ensure that the highest quality available version of a track is selected.

Can you give a specific example where Roon selects a lossy version over an available lossless one.

That’s a fast reply thanks

Well, in my experience that design is rather primitive. Besides failing to check if the higher sample rate is available as a lossless file, it also in other cases selects MQA files that won’t be resolved to the declared sample rate for people without MQA DACs (like myself)

Example “Against Empire - Billl Laswell”
If I hit play on the album, it starts with “Golden Spiral” fetched from Tidal & lossy

My Roon
I have both Tidal and Qobuz but in my case both subscriptions are not AQ limited.
I don’t have that album in my library (either as a CD or added).

When I hit play, Roon selects the Qobuz version. Checking the signal path Roon confirms it is streaming #2 a lossless version.

So in both these case for me, Roon is doing what I’d expect (when the quality is the same, I have no idea data uses to tie-break the selection).

I then went into Roon’s Settings --> Services -> Tidal and changed it from “Master” to “Normal”.

From what I can see, Roon’s search results don’t seem to be taking into account that Tidal (due to subscription type) will only stream the album in a lossey format.

Though in my case, Roon is by default selecting the Qobuz lossless version, but as it does this for me in both cases … I can’t draw an concussions from that.

How do you have the Tidal streaming quality setup in your Roon setup?

My Tidal streaming quality is “High”

It’s interesting that for you it selects Qobuz between the two versions. I wish it did the same to me (would be a workaround for my issue).

In your case then, to reproduce my finding you should set Tidal to “Master” quality and Qobuz to “320 mp3”

In your case then, to reproduce my finding you should set Tidal to “Master” quality and Qobuz to “320 mp3”

Good idea, just did it, and Roon selected the Qobuz version and streamed it as an MP3 … rather than than selecting the FLAC version from Tidal.

Good doing to testing with you … one for Roon’s @support now to comment on.

PS I really enjoyed the album … I played it all the way though.

Is this album already in your library from TIDAL?

When Carl tested, the Qobuz version was the default, but neither was in the library. If the TIDAL album already is in your library as the primary version, this is what Roon will default to. You can change the primary version from the Versions tab.

Hello!
No, @dylan the album is not in my library

Thanks, @Cristian_Martin. Upon testing myself I see the TIDAL version pulled up first as well.

Generally speaking, though, there is no way to choose a default between TIDAL and Qobuz, regardless of the quality available to you. I’ve passed your concerns along to the team, though! We appreciate the feedback.

Thanks for the replly @dylan
But that’s not the issue being mentiooned here. Defaulting to Tidal or Qobuz would at best be a workaround for my problem.

The issue instead, and corectly undrestood & reproduced by @Carl , is that Roon ends up selecting lower quality files (lossy even!) when higher quality ones are available. That’s what the “Billl Laswell test” proved

My explanation for this is that Roon only compares sample & bit rates of the available album versions. It doesn’t consider other potentiallly pertinent information :
a) doesn’t consider that the user may not have a Tidal / Qobuz subscription high enoungh to actually play the files at that sample rate. ( Or they may have selcted, for those services, a lower “streaming quality”) This is what the example discussed above was about
b) doesn’t consider the user’s MQA playback capabilities. If user doesn’t have MQA decoding DACs and Qobuz also offers hi-res for that album, the “correct” album variant to play is from Qobuz, in this case. (I can devise a test case for this one too, if needed)

When all things are equal (examplle 44/24 available both on Qobuz & Titdal) allowing the user to prefer one service over the other would be a cherry on top. (That’s because I’ve heard people saying they prefer the sound of one service over the other. I didn’t notice a significant difference myself , yet.) So reallly welcome, but not as important as the main point made here

Here’s another example, highliting another related detail. Or a bug

Album is “20 Songs of Inspiration by Jim Reeves”
Note in the picture how from two 44.1/16 album variants, Roon selects ( again

The surprising fact is that it says Source : “44.1kHz 24bit (!!)” So… why 24 bit? Note that this may be the reason Roon selects the lossy source : it might prioritize the 24 bit variant, believing it is better. 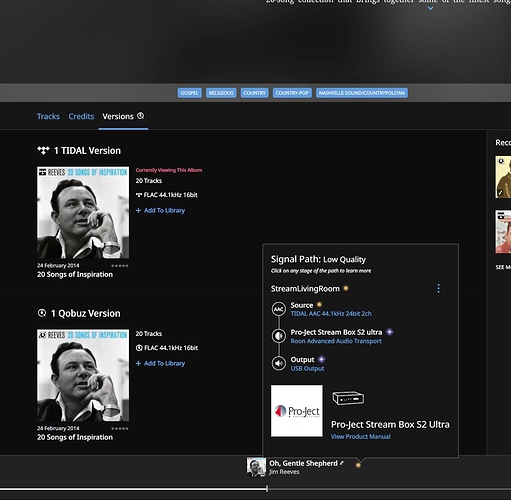 Bit depth is only meaningful in reference to a PCM digital signal. Non-PCM formats, such as lossy compression formats, do not have associated bit depths

Sure, that’s true. For a lossy format (or lossless, for that matter), you could decode it into a higher bit depth, without any influence on the actual sound quality.

So maybe my question was not the most important, true.
I was just trying to feed further details into the original problem.

As stated in the message I’m not sure if Roon’s track selection logic doesn’t use that 24 bit in its decision on which variant of an album to choose. Alternatively, it could be used only in the UI for display purposes (hopefully).
Being a software developer, I tend to speculate like that with the intention that it may help other developers

I’m not sure if Roon’s track selection logic doesn’t use that 24 bit in its decision on which variant of an album to choose.

I doubt it. And I think your explanation in your reply to @dylan above is probably right.

And I think your explanation in your reply to @dylan above is probably right.

Thanks for the clarification, @Cristian_Martin.

Right now it is not possible to change the version that Roon picks by default when searching, but I’ve passed this feedback along to the product team for future consideration. I would recommend also posting your suggestion in the Feature Request section of the site.

However, because Roon it is not taking into account that user has a limited “quality” subscription (as setup in Roon Settings Services) to one of the streaming services … it is selecting that track from the wrong service and hence the higher quality track, that is available, is not being streamed.

I see this a bug not a feature request.

I agree. Roon has all the right info to pick the highest quality available track. Not doing it is a bug IMHO. Thanks for pointing this out to dev.

I think feature requests are:

Being able to select the specific option for resolution / service or set a priority order for selection.

Taking into consideration equipment capabilities - like not assuming mqa is the highest resolution if you can’t render it.

I would recommend also posting your suggestion in the Feature Request section of the site.

Thanks. I had no ideea where is best to post so your proposal helps

Roon has all the right info to pick the highest quality available track. Not doing it is a bug IMHO.

I’d say it’s a naive implementation rather than bug