I just updated my Synology 918+ to the just recently released DSM 7.0 Preview. As I almost expected the Roon Server for Synology is currently not able to run under DSM 7.0. So be warned if you depend on running Roon on your Synology NAS. I just wanted to create this thread so developers can maybe give some feedback on if and when a new Server version that is compatible with DSM 7.0 will be released. I’m also happy to give new versions of the Server a try if this could support developers in the process.

Same here. I’ve fired up Roon in a Container and restored from backup until this package is back up and running.

I was just able to start the sever manually with the following command via SSH:

Server is up and running.It’s not showing in the UI that it’s running but Roon finds my core again. So at least there seems to be a workaround. 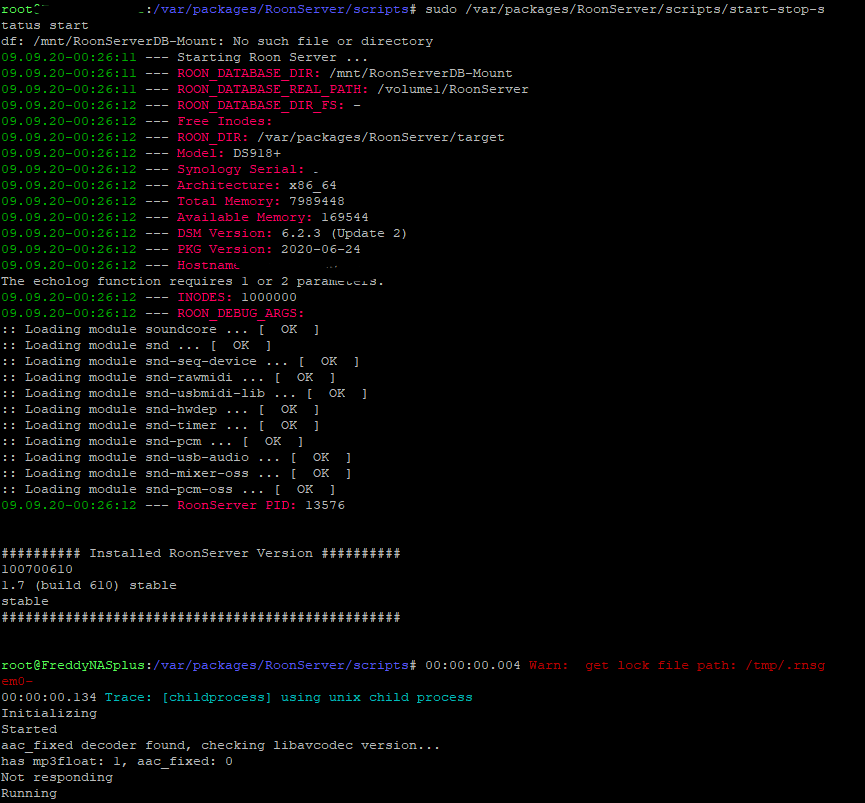 Thanks for the information. I am enrolled in the DSM 7 preview and was going to install but maybe I will wait a bit. Although the workaround seems viable…

Any update? I am running Roon core on my Synology DS1019+ and it has been working fine (after I moved Roon database to an external USB with 64GB Class 3 MicroSD card. Guess I should not move up to DSM7.0 for now…

Synology didn’t release any updates yet to the DSM 7 preview which means that also no changes concerning third party packages have been made. Not sure if Synology communicated any news on the developer side so that third parties know how to be compatible to DSM 7. @crieke: Any news on your side?

great, now ROON is running on DSM 7.0 beta, not a big problem and SSH works via powershell even from my office notebook

The latest DSM7 update is the RC version.

Thanks to u! Works great!

Thank you, I updated to 7.0 without thinking much, then I realised my Roon unable to start. This works, appreciate that!

Roon in a docker on DSM 7 is running great also, see this thread:
https://community.roonlabs.com/t/walkthrough-roon-in-a-docker-container-on-synology-dsm-7/164969/27