Hello everyone,
The upcoming DSM 7 for Synology Diskstations seem to change several things for third-party app developers.
One of those things is, that a third-party app has fewer privileges. A third-party app for example can’t run as root or system-user anymore.
The current Synology installer won’t work on the Technology Preview of DSM7 (or the final DSM 7 when it is released).
I am currently looking into this, to find options, having Roon Server run, according to these changes. But it will probably take some time.

I don’t see this as an immediate issue for existing users as updating will probably be optional, but for new units the DSM7 might be a requirement and this will no doubt irk some new users of the platform.

We are going to probably see similar issues on MacOS 11 no doubt too - as things get tightened up for apps.

thanks for the warning. I would normally update my Synology NAS as soon as DSM7 would be available but will now wait till your Roon server implementation works.

I saw this after installing DSM 7, my roon server does not work anymore. I cant revert back DSM.

Received notification that DSM7 is now in beta and several improvements were implemented since preview build.

… solved the issue myself: upgraded to DSM 7.0 and then restarted Roon core with root privileges, following theserecomendations: Roon Server on Synology DSM 7.0 Preview

Restarted by ssh with root works, bur the command needs do be run every time the NAS reboots, is there a way to run this command upon startup automatically, thanks.

I would think a simple shell script in the proper directory should work…it’s been a while since I worked in Linux but I’m sure it is not that much work to get it to run at startup. Unfortunately, I can’t update to DSM 7 yet but will try when I do…

Go to DSM 7 control panel, go to task scheduler and create a new task one as a root user to start the script of roon at the startup.

And it will work well, until a new update comes for support for DSM 7, updates could not work for the roon app. Let’s see when it happens. 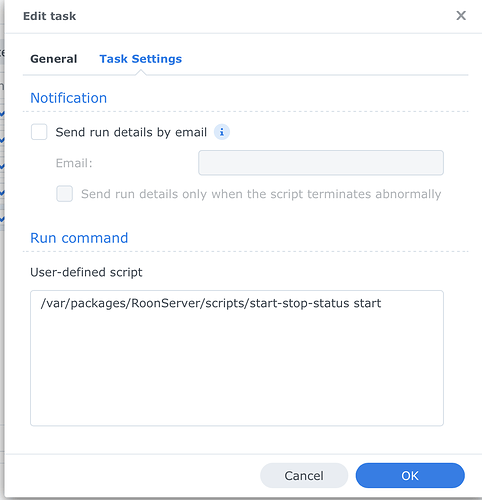 This will be a turbulent ride, the update from today broke completely the dsm7 roon install, any help is welcome.

Update: The same ssh command Works after restarting the NAS.

Hello @crieke, thank you for all your help. I was wondering if there are any updates on this. Thank you!

I have made all required changes according to their DSM7 developer guide and it is currently running on my diskstation.
In DSM7, thirdparty apps are not allowed to run as root anymore, due to that, I have to figure out some aspects (mounting external shares for example).
Unfortunately there is no support for local audio playback in DSM 7.

Thank you for your answer @crieke. I’m sorry if I am not understanding you. You said you made required changes and Roon is running on DSM 7 right now. Can you explain how you did that? I would like to update my synology to DSM 7.0 at some point.

You said you made required changes and Roon is running on DSM 7 right now.

It is not something trivial, you can simply change on the previous installer.
I will release the new installation, when I am confident, that it works well and is easy to to set up.

Thank you @crieke! I appreciate you.

Looking forward to the new release!

Question: I have expanded RAM on my Synology, 48GB. Are there any RAM changes that happens when we can’t run as root anymore? ulimits or anything in that nature?