I want to propose a broadening of the philosophy regarding Roon’s interface design: I’d like to see more consideration for those who listen to individual songs rather than entire albums. I realize that this is will be considered heresy by a lot of my fellow music fans, but here are a few reasons to consider this:

It could be said that serious album-oriented listening doesn’t require much in the way of software; it doesn’t even really require a database. An organized set of folders and gapless playback is about all you need, right? A rich metadata layer is just the icing on the cake. Roon has all this handled beautifully already, so why not emphasize singles-oriented interface features going forward? Enhanced Focus, track-based metadata, etc.? Obviously, specific individual feature requests are required, but I wanted to put this out there as a “conceptual” feature request.

[ducks to avoid all the rotten eggs being thrown]

What did you have in mind?

Roon already handles “singles”, as in the single you can buy. A single can have its own artwork. Note the “album” type as Single.

Now, buying a single track off of an album which is not released as a single, can still function the same way. Roon will see the single track and add the album graphics, you can go in and Edit the album, tell Roon it is a Single under album type, even add your own custom artwork if you want.
Under albums, Focus, you can select Single as the album type to focus.

Pic of a purchased Single: 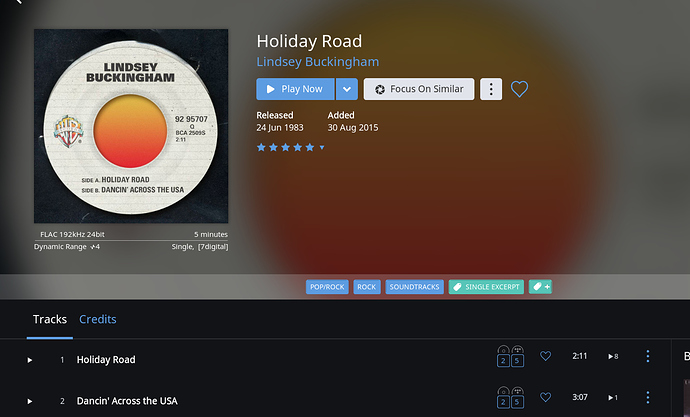 Pic of a track off an album, I’ve turned into a Single: 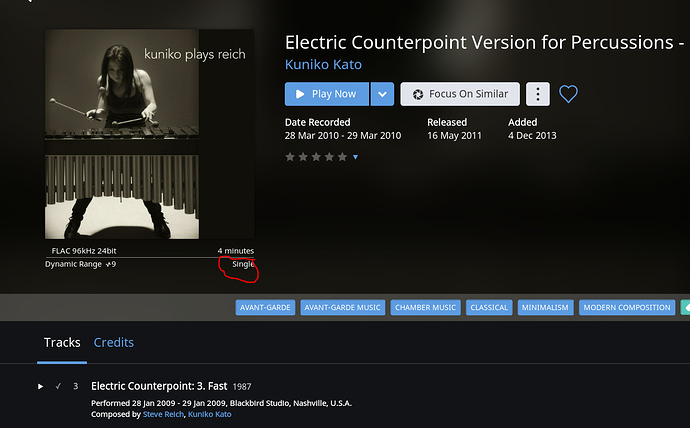 I mostly play tracks (except for classical albums) which I try to organize with Tags, which has flaws. As @Rugby stated Roon already has some features for Singles, but I do miss genre at tracklevel here.
I am curious how you see this.

But they show up the same in the album browser. No indication of being a single there.

I think Andy does not specifically refers to singles as in the way the music was released but he is referring to playing single tracks of an album and a way to get there easily. It’s one of the reason I would like to have the option to see a track listing in the album browser so I can see the tracks in an overview without having to open each individual album. Many people listen music the way Andy is referring to.

The Composition browser could be a halfway house. Many tracks on albums qualify as individual compositions in their own right. Although some albums treat the complete album as a single composition, so it isn’t perfect. If you really want to go granular, then the Track browser is the current option to use… Genres are still not at track level, though.

What did you have in mind?

A host of things, most of which are (or will be) in separate specific feature requests. But here are a few examples:

I think viewing song-by-song listening as important would also mean viewing the smartphone remote apps as more important. When I want to DJ on the fly, I usually don’t have a laptop or tablet in easy reach.

Hi Andy,
I read your post twice, I can see your justification for change … but what is it you wish to be changed and more specifically how do you suggest the interface is changed to improve the experience for those that like to queue up tracks rather than whole albums?

I look forward to playing with this. I have some multi-genre soundtracks that I’ve considered deleting just because of the way Roon treats multi-genre albums in Focus/Shuffle. I might try making them into a set of singles and see what happens. (Still though, a lot of the access points are album-based.)

Thanks for asking! I posted a few ideas above (I got a notification of your post just as I was about to submit it.), but I will try to flesh it out in more detail.

A lot of us amateur DJs have been curating collections of songs digitally since they took away our mix tapes and replaced them with iPods. The first thing I did in Roon (and JRiver and Tidal) was to import my iTunes favorites.

Better access to those Favorited tracks could take many forms, but this one alone would make my musical life 100x better:

When I go to an Artist or Genre page, I’d love to be able to shuffle just the songs I have marked as favorites. I realize that this can be done by creating a Focus and saving it as a bookmark, but I don’t really want to do this manually for 100 genres and 1000 artists.

We want your ideas for Playlists! Roon Software

Playlists are a notorious weak spot for us. None of us at Roon Labs are big playlist users so we’re looking to you guys for ideas on how to nail this. So I’d like to know how you use, think about, and create playlists. Do you want additional customization (images, descriptions, ect) of playlists? How do you want to browse your playlists? Do you want different ways to add music to playlists (smart playlists, filters)? Here’s a mockup of a work-in-progress playlists design. Disclaimer: all of th…

A host of things, most of which are (or will be) in separate specific feature requests. But here are a few examples:

Vastly more powerful playlist tools, such as “smart” playlists like those in iTunes, JRiver, MediaMonkey, etc. (Focus is a nice start, but has a long way to go.)
Track-level genres
Top Tracks visible in Artist page on phones
Top Tracks under Genre page (all platforms)
Ability to shuffle Favorited tracks from Artist and Genre pages
Ability to add tracks to library, to favorites, and to tags from a Tidal playlist

I think viewing song-by-song listening as important would also mean viewing the smartphone remote apps as more important. When I want to DJ on the fly, I usually don’t have a laptop or tablet in easy reach.

This is quite similar to how I listen to music. I’m basically still in the mixtape world. A merger of Focus and Radio concepts with more robust logic, heading in the direction of Smart Playlists, would be quite welcome. There are a lot of posts on the topic (many by me, Paulb and Sallah). A lot of specific suggestions can be mined from these posts.

No rotten eggs from me, I am a great lover of the individual track philosophy. I have posted in the past regarding individual track ratings, and the basic philosophy behind this is the same as intimated in this thread. iTunes is good at this stuff, although the blessing here is that you can create playlists in iTunes that are then directly picked up in Roon. It would of course be so much better if Roon could handle this directly.

This is quite similar to how I listen to music. I’m basically still in the mixtape world. A merger of Focus and Radio concepts with more robust logic, heading in the direction of Smart Playlists, would be quite welcome. There are a lot of posts on the topic (many by me, Paulb and Sallah). A lot of specific suggestions can be mined from these posts.

Yes indeed! My point in starting this thread was to give a sort of conceptual theme to all these distinct feature requests and to make the point that there are many, many of us who approach music listening in a “mix tape” kind of way. Also, I hope Roon will consider that, while many traditional audiophiles may be album-oriented listeners, adding features that appeal to the single-song listener might considerably expand their potential customer base.

I wasn’t sure if that thread was still being monitored since it was started about 2 years ago. I’ve invited @brian2 to participate in this thread, just in case.

I wasn’t sure if that thread was still being monitored since it was started about 2 years ago.

All active topics are monitored, the discussion and feedback is always important to help Roonlabs steer their product.

Yes — at one time, pre-Roon, I did playlists and hit on this when I tried to move playlists from PC to car, or Astell&Kern, or whatever.
The problem with typical playlist implementations isn’t about referencing tracks or albums, they reference files. Physical. Bleagh.

Hi Anders. You’re exactly right. Except in my case I would embed playlist membership within custom file meta tags…in the files…so that my playlists were always path and software independent. Hence my drumbeat for Roon to allow importation of custom embedded tag info. And they were dynamic-very similar to smart lists.

I haven’t successfully convinced the Roon team that this is a legitimate use case.

How do you Roon? Roon Software

Sallah, thanks for the detailed overview of how you Roon. I’m glad my suggestion was helpful. Those AHA! moments are always great. I guess it’s time to bare my soul and show what I’ve been doing and what I desperately want to be able to do in Roon. First, a bit of context. If people had not seen Foobar in Columns UI mode, they missed a seriously powerful piece of software. While I am happy to leverage Roon’s many means of listening to music, It is important to me that Roon be able to come c…