Some performances are not displayed in All recordings 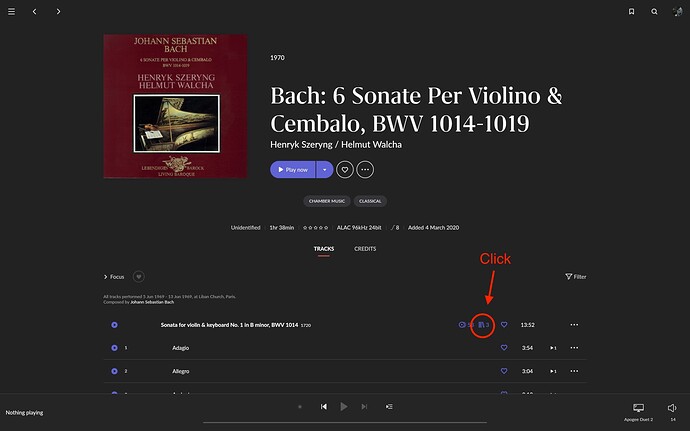 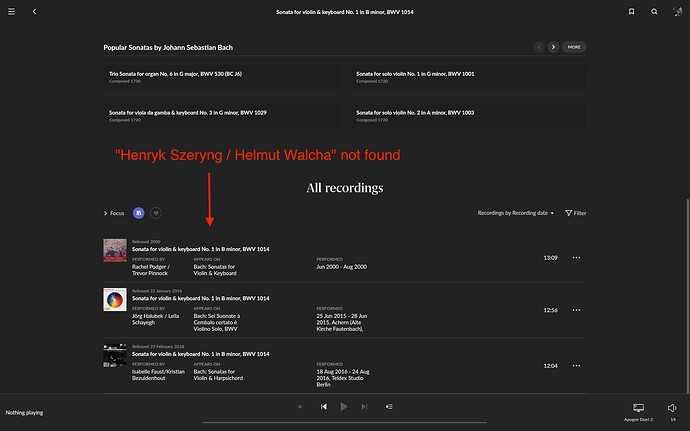 Occurs on some albums.
This is especially true for albums that don’t exist in Roon meta database.

Please check if “Complete recordings only” is set to on in the dropdown list under “Recordings by…”. If so, deactivate it. 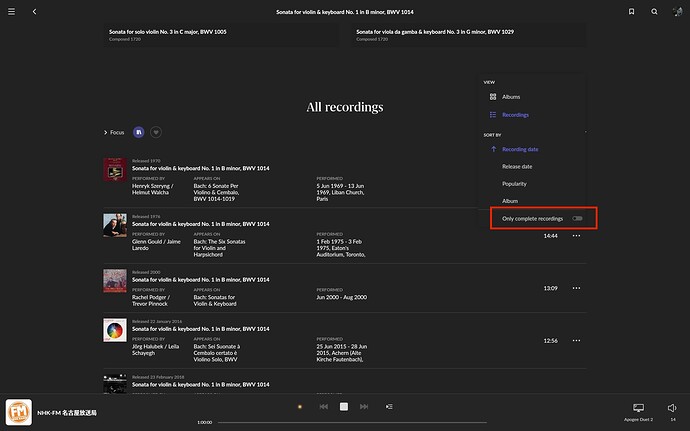 @Andre_Gosselin
Thank you very much!
When unchecked, the number of recordings increased to six. What kind of function is “Only Complete recordings”?

I somehow understood what it was like.
But how do you determine complete and incomplete? Both “Henryk Szeryng / Helmut Walcha” and “Glenn Gould / Jaime Laredo” have 4 movements, so I think it’s complete recordings.

But how do you determine complete and incomplete? Both “Henryk Szeryng / Helmut” and “Walcha Glenn Gould / Jaime Laredo” have 4 movements, so I think it’s complete recordings.

@support This “feature” was introduced in Roon 1.8. Roon devs admitted it was experimental, and based on external data grabbed fom somewhere they won’t mention. This issue has been raised many times before. Roon answer was that it can help some people comb composition excerpts from their searches, and if they are not satisfied, users just have to turn it off. As simple as that. Problem is: how do you turn it off when (I suspect this was your case) you do not know of its existence or forgot about it?

I suggested that the UI be modified to clearly show the current setting of this “feature” at the top of search results. Will this ever happen ? Only Roon knows. In the meantime, we can keep reminding them.

I agree with you.

I have also read and understood these topics now.
Thank you very much.

Core Machine (Operating system/System info/Roon build number) ASUS i7, Roon 1.8 b778, Win10 Network Details (Including networking gear model/manufacturer and if on WiFi/Ethernet) Ethernet wired Sonore optical rendu Description Of Issue After searching for Berlioz Symphonie fantastique: [image] I am informed of the presence of 7 recordings from my local library: [image] Note that there are really 8 recordings: 5 in CD resolution, 2 in high res, and 1 in DSD, whereas 7 were announced b…

"All Recordings" & the new feature "Only Complete recordings" don't fit
Compositions recognized, but not included in local totals
system (system) closed July 12, 2021, 3:24am #7