A little bit earlier then I originally planned, but here’s a new update. This update fixes the annoying issue of the 1GB on the Pi 3B+ that some of you are having (resulting in ticks and pops on USB audio).

Furthermore I switched to a different architecture for communicating between the different components. This results in the display being able to support non-latin characters on the display for one, but the response time to button clicks as also increased dramatically. This also lays the groundwork for remote controls: I already have an RF-based one working over here, so that will land soon.

What does it mean in real life? That we won’t be bitten anymore by sudden OS updates that impact RoPieee’s software components as well. This had lead to a few moments the last year where all of a sudden stuff stops working outside my control. Those days are over (fingers crossed).

So what’s not in that I promised? Different LED mode’s. That will need to wait for the next release.

Hi Harry, I´m new to Ropieee. Two weeks and working perfectly. This is the first update in my case. To update Ropieee just reboot and the update will be trigger, wait some minutes till the process ends -led slow blinking- and that´s it, isn´t it?

Welcome on board!
Basically you don’t need to do anything indeed. After a reboot the update is being pulled in automatically, in the background. So no need to wait for anything, you can use RoPieee as you normally do.

A pleasure! Looks like a great, easy, transparent and convenient update system, I just reboot and yes, the new version number is there, in the web admin, and the RPI-Ropieee is working ok so far.

can you send me feedback? then I can have a look

Ok. I found out what the issue is. Just not sure how to fix this unfortunately. There has been a (small) damage on your SD card, and the thing is that’s exactly the part that needs to take care of pulling in the update.

Are you familiar with SSH? Putty for example? Then I can instruct you what to do.

Yes I am familiar with SSH but I use a MAC so Putty doesn’t work for me. I use Terminal. Instruct away Obi-Wan.

Harry, for those of us using the beta channel (with the issues with ROCK), do you advise switching to stable or staying on beta?

Harry do I just copy the three commands and run them or do I do one at a time?

Hi Harry, as I told before, Ropieee updated ok, looks like, and is working with no problem, but in the Web Admin page there is an inconsistency in the versions: in two places, up and very bottom, shows version 153, but in the middle detail list shows the 159-1 and the right date (20180901). Is that normal? 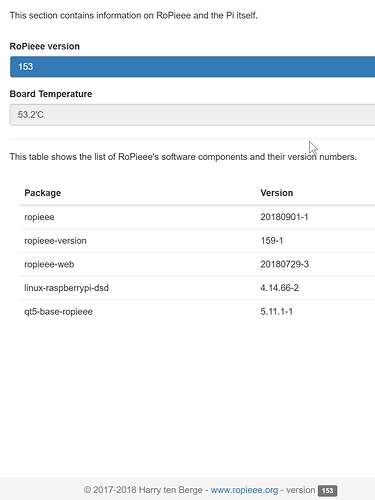 Harry it worked great. I figured it was one command at a time so that’s how I proceeded. It worked great and now I am at 160. Thanks for the help.

yeah that’s just a caching issue. next time after a reboot it will be fine

Spoke to dad and he said with v160 he’s seeing flashing of the progress bar, on RopIeee Touchscreen.

Is that normal with this update?

Just sent c36f1185e38c1da8.
Since this night’s update I’ve got a Connection Failure and I had to re-enable the Remote Extension. Failure has gone now. But Touch display doesn’t show any info anymore and is unusable except for the power button. Functionality is OK (ropieee is streaming to my DAC). 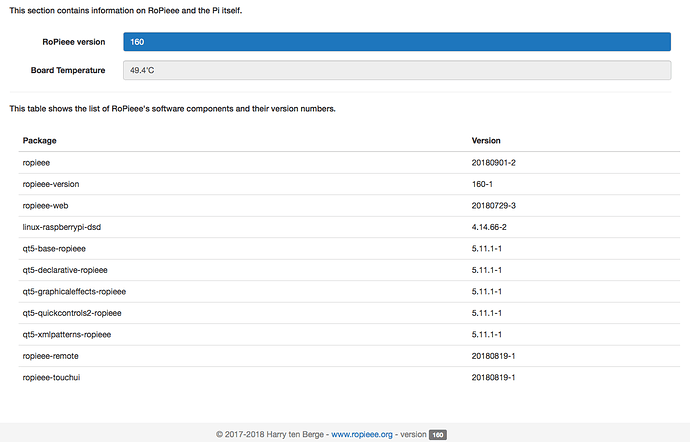 Can you restart the unit?