I’ve noticed occasionally albums which I’ve added to my library disappear. I only stream (no local library) and I use Tidal & Qobuz. I know Artists will ‘pull’ albums from time to time, however the albums in question are still on Tidal & Qobuz streaming services, but they aren’t in my Roon library anymore.

Not sure why why they go missing ? Has anybody else noticed this ?

Albums I’ve noticed recently are (but they have been more)
Norah Jones - Come away with me.
Freya Ridings - Freya Ridings

I have had this issue with Qobuz:

I’ve been using Qobuz for almost a year now and one thing I’ll say for tidal, their support never told me to delete my library. I recently got hit with the dreaded “albums not showing in roon” Qobuz bug. It happened 3 times before. The first two times, Roon leaned on Qobuz to make sure it got fixed (it’s apparently an issue on the Qobuz side). The second time took longer but eventually did resolve itself. This time was different. Well over a week all of my albums were sapped from Roon. They we…

The reason turned out to be, when a label or an artist makes a change on an album in Qobuz, Qobuz flags the existing copy as unavailable and uploads a new copy.

Over the course of a year, it was pretty brutal and a ridiculous number of my albums suffered from this rot. It was then compounded by some odd issue with Qobuz where it will just remove the albums from your Roon library but you can still see them in Qobuz (although they are marked as unavailable to play).

As above Tidal just remove them and replace with a new version so they just disappear. This is the nature of streaming and why many of us still maintain our own files as this happens all too often. Qobuz is very bad at removing and leaving the old versions as unavailable which is more annoying but gives you a warning its been changed and you can usually add the new one from the versions tab.

Ok. However, if the album has been added to my roon library, it should be in the roon metadata in the roon database, and therefore continue to show, whether the album is available to play or not surely ?
For example, do you lose the play history of the album, which is used in roon radio choices etc?

When I had the Qobuz issue, because it was on the Qobuz side, it removed it from Roon. I couldn’t see the album.

The data tied to it (I.e. Roon database data) still existed but wasn’t visible because Qobuz had removed the album.

Speaking to Qobuz support, they told me to delete the albums and reimport them. The process of which creates a new DB entry so I lost all of my edits, ratings, plays and tags attached to that album (because Roon treats every copy of an album separately).

I don’t see the album when it disappears. To me, this isn’t a Tidal or Qobuz issue. Yes, they decided their content, but that shouldn’t effect my Roon library. ( I accept I may not be able to play the album).
One of the main selling points of Roon is the ability to organise your music library, and then albums disappear.

I agree with you that is how it should work but I’m just explaining how it did work from my experience with Qobuz.

It’s a bug for sure, there was a widespread instance of this before and Roon went after Qobuz so that the albums returned to everyone’s library but now when it happens to individuals, Qobuz aren’t fixing it.

They advised me to just add a new copy and that the old copy is doomed, it will not return to Roon.

Here is the original issue that effected a lot of subscribers:

This isn’t a Qobuz issue. I’ve had Roon / Tidal for over 2 years, only subscribed to Qobuz since xmas. This was happening before xmas with albums.
As I’ve said, the streaming company can change their content,
but that SHOULD NOT make changes to my Roon library. ( I agree the album may not be playable!).
This is a Roon issue, I really don’t understand why you have contacted either Tidal or Qobuz.

Why do I have NUC and a DB, this should contain the metadata.

If you read the thread I linked you to, Qobuz has a known issue where they will not push your albums to Roon.

It happened to me too relatively recently. If you think it is a Roon issue then by all means tag support, maybe it’s different issue to the one I have linked.

For reference, here is Qobuz acknowledging it’s a bug: 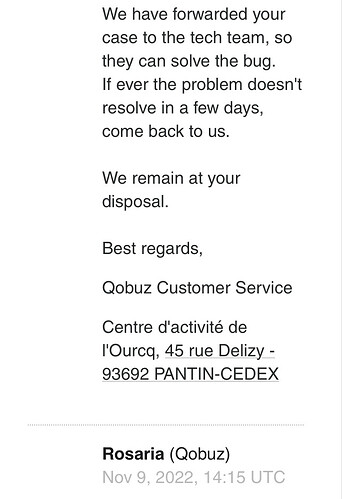 (It did not get fixed, I had to just redo my library)

99.9% of my albums are from Tidal.
As stated I’ve had Roon / Tidal for over 2 years, only started using Qobuz at Xmas. This was happening before Xmas.
The albums which went missing was from Tidal, I had these albums a long time.

No if it’s removed from Tidal it will go from Roon as it no longer exists it will be removed from your Tidal l favourites by Tidal and then when the next sync comes to Roon it will disappear.

Qobuz often do the same if it’s gone from their service, but if it’s just a new version they have replaced a previous version with then the old one stays in your library and is shown as inavailable and you need to add the new version via Roon and remove the old one. This is down to how Qobuz do their linking of versions.

I have had Roon for 5 years and had Tidal for most of that and Qobuz since they added it to Roon it’s always been like this.