Volume controlled by Roon on which DACs?

Does anyone know which DACs that are used as pre-amps can accept volume control requests from Roon?

I don’t want to adjust the audio stream’s volume coming from the Roon Core, I want the actual DAC to make the adjustments.

I can confirm that the Mytek Brooklyn does not - even though the driver on Windows accepts volume commands they are ignored.

Mytek Brooklyn works just as well in the OSX world too. Brooklyn also supports managing volume in either the digital or analog domains. It’s working beautifully.

@duncan says it doesn’t work, you say it does - not sure who to believe!

If the Mytek Brooklyn is connected via USB, you can use the volume adjustment in Roon to control the pre-amp stage of the Mytek?

Well I can’t vouch for the Windows version. I’m running my Brooklyn off a Mac Mini and have setup Roon to pass volume control to the DAC. I’m listening to it right now and spinning the Brooklyn volume button. In fact Roon won’t even allow me to adjust volume - if I click on the volume it says “Volume Control is Fixed”. Works just fine here.

I would love to be proved wrong, but under Linux on my cubox the only options are:- 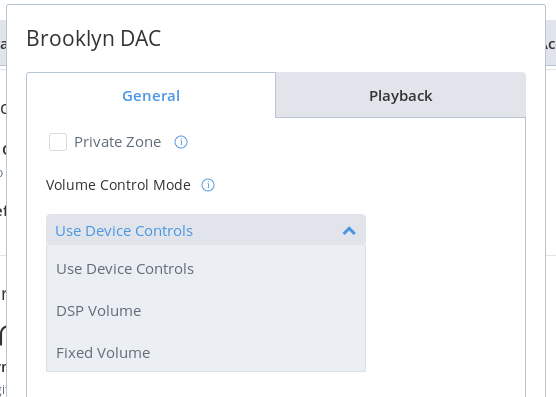 and if I set to ‘Use Device Controls’ it shows

On my Pi that is running Linux 4.4.9-v7+ I can also set to ‘Use Device Control’ and this time a volume bar shows in Roon; but nothing happens when it is changed.

Same thing on Windows 7 with the MyTek Driver installed.

After searching the web, I found this quote

Now that MQA is implemented, I was hoping the lack of USB HID volume control might be addressed.

Yes, this is on the list of future features, but this is a particular challenge as it requires OS<>DAC communication over USB. It will happen at some point, but we can’t yet promise when.

I will dig out my Mac and try it on there - here’s hoping.

Happy for some help to get this working as it’s something I want to use.

Happy for some help to get this working as it’s something I want to use.

I am guessing based on your digging that it is not yet supported by the pre-amp DACs. I tested with a Cambridge Audio DacMagicPlus - no luck.

Derek - the key is how you setup Roon for your endpoint. I’ve specifically set Roon up to pass all volume control to the Brooklyn. So now if I try to adjust volume via Roon it says “Volume Control is Fixed” which is the desired setting as I don’t want Roon to control the volume. 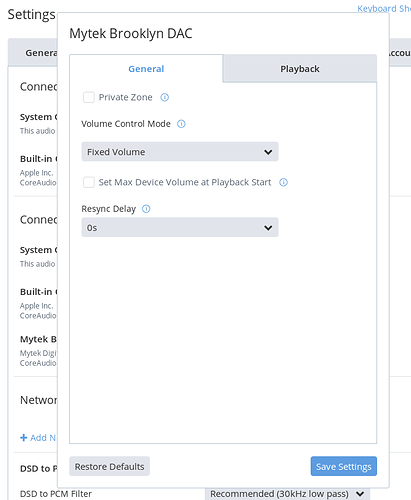 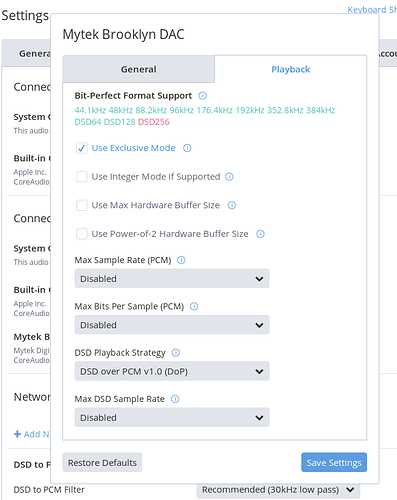 My setup is a headless Mac Mini running Roon Server with direct USB to the Brooklyn. Music resides on a Synology NAS that like the Mac Mini is hard wired to the router.

I’m able to do all volume adjustment directly on the Brooklyn. I’m also able to change settings on the Brooklyn between Digital and Analog volume control. It all works flawlessly. I’m listening right now.

Does anyone know which DACs that are used as pre-amps can accept volume control requests from Roon?

Hi @rayski, I was answering this question that Derek initially asked. Which I think we are both agreed on. It does not work. (sadly)

Ahh I understand. You’re looking for Roon to control volume all the way to the pre-amp portion of your DAC/Preamp combo. I misread completely - i.e. Roon passing all volume control to the end device and not controlling volume at the end point. Sorry for the confusion.

What the OP is talking about is called USB HID volume control. Not all DACs support it. The Brooklyn does not - I asked Michal from Mytek about this a few times and confirmed it does not. He said it was feasible to add via firmware but that was a long time ago and I don’t see any sign of it. This was the one single thing stopping me from buying the Brooklyn, and the Ayre Codex as well for that matter. My understanding is that this is a capability of all Sabre DAC chips - but not all companies enable or implement it. I have no idea why it is SO useful…

You might find this thread I started on the CA forum useful:

This is what I wrote there:

Wow, great post @Ben_Curtis - it is puzzling why vendors aren’t supporting it more broadly. It does make a lot of sense.

Thanks, it’s my pet annoyance

I don’t understand either. Having USB HID volume control enables a bunch of nice functionality, like controlling the volume of the DAC itself via for example the volume slider of iTunes/Audirvana/Roon etc, or even over wifi from the Remote app on an iPhone/iPad etc. If your DAC has a display you can watch the DAC volume numbers go up/down in real time.

After looking into this a bit further as it is a feature that I am very much interested in, it turns out that my DAC is fully supported!

I have a Naim DAC-V1 and if you connect Roon via the USB input you can control the main volume on the DAC by using the volume control in Roon once you have selected the ‘Use Device Controls’ option in Roon and the ‘PC Volume’ option within the DAC.

You can also set the DAC up with a reduced maximum volume so that if you accidentally output a high volume setting from Roon it will not blow your speakers.

I found the Audioquest Dragonfly red implements the volume control feature of the Sabre chip, and it now offers MQA decoding. Another one is the Exasound DAC when paired with their PlayPoint streamer. Auralic Altair integrates their streamer and DAC into one box, and volume can be controlled by Roon, and would expect their Polaris does the same. I wish the combination of their Vega/Aries DAC and streamer had the same functionality. I’m looking for other options too, and interested in hearing about more DAC’s offering volume control at different price points. Cheers.

The original Audiolab MDAC supports the HID controls. Note that there’s a newer model - dont know about that one.

The PS Audio Directstream DAC supports Roon volume control over the Bridge II network addon, but I have not tried it with the USB input. I’ve also had mixed results when using it without a preamp. It’s sounded pretty good directly driving one of my amps (Air Tight ATM-1s), but a little flat and lifeless with a few others (Hypex NC400 mono blocks and the Benchmark AHB2).

The latest firmware (v2.33 & v2.34) for the Brooklyn DAC has added HID support, but it still does not seem to be detected by Roon, in my case (connected via uRendu).

Adeeb, thanks for the heads up - I’ve just updated mine, and via RoPieee I can now control the volume from Roon

Only down side is the volume control does not match:

@Support Would this be a Mytek, Roon or Linux issue?