Which DAP to buy?!

Two years ago I purchased an Aune M1s digital audio player, and I am quite happy with it.
Now I got a Rock install on my NUC and I like to use a DAP which can be used with the Roon app.

Which DAP would you recommend?

I would put in some sort of spending target…

we have been here before Roon Ready DAP?

I’ve been very happy with the Onkyo DP-X1, which is right at your price point. MQA and Roon-end point capable. Also has a 2.5 mm balanced output.

Does MQA work with a roon stream now?

I picked up the Astell&Kern SR15 this week after a quick “at home demo” of the Shanling M5S. I was also considering the Hiby Pro 6 and Sony ZX300.

The AK is awesome. The entire user experience including sound is superior to the Shanling. It’s more expensive but in my mind well worth it. I know Roon is coming which was the final driver … streaming Tidal, Qobuz etc are bonus features.

A&K promised Roon on the SR15 about 18 months ago now. They’ve gone stone quiet on it since mid last year too suggesting that it’s never going to happen.

I bought my SR-15 a year ago on the assumption that Roon was imminent and although it’s a great sounding unit it’s crippled for streaming without Roon for me. It does have Tidal but it’s app is way out of date and does not support offline mode. My use case was for an inexpensive mobile Roon endpoint to feed a Chord Hugo 2.

In 2020 I want my DAP to reliably stream at home or on the go. I don’t want to mess about loading songs onto an SD card.

I did but another very inexpensive android based DAP around the same time though called a Fiio M6 and although it’s not as great sounding as the A&K, Roon works and it’s Tidal app will offline. It’s only weakness is patchy Wi-Fi performance.

Massively disappointed with A&K though.

Wagner in the gym?

I have an old iPod Classic 160Gb in the car and a 64gb SD card in my phone that on MP3 , why better in the car?, amounts to hoards of music

Loading the iPod is simple I sync it with JRiver

I was about to sell my “vintage” Ipod Classic 160GB as I don’t use iTunes anymore (neither the “new” Apple Music app) and therefore have no means to update the music on the Ipod anymore.

I was totally wrong:

Just installed the free alternative Rockbox firmware on my Ipod which is simply great.

Some of the “New” features: 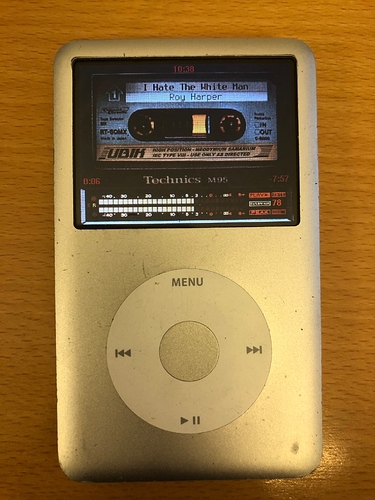 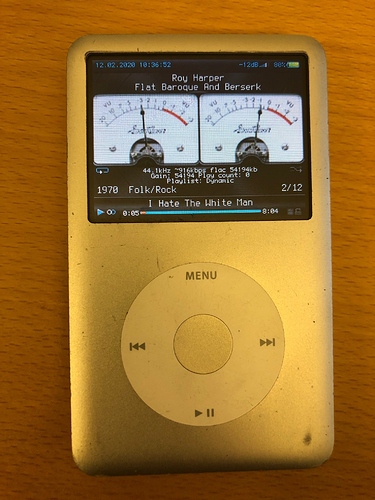 Still rather happy with my FiiO M11 works great with Roon these days and has Spotify, Tidal, and a host of others I dont use.

I think this is the most recent thread on this topic: Is there any truly network enabled (i.e not acting as a USB DAC) “Roon Ready” DAP on the market as of now (Dec 2020)?

Core Machine (Operating system/System info/Roon build number) Roon Core Running on a DS718+ Synology in a SSD 1.7 on 610 Build Network Details (Including networking gear model/manufacturer and if on WiFi/Ethernet) Router TP Link Archer C8 Audio Devices (Specify what device you’re using and its connection type - USB/HDMI/etc.) Fiio M11 Description Of Issue Roon upsamples/downsample every song not matter if it’s local or streaming, MQA or not. It may vary the sample if I play on Tidal, or…

And it seems some android devices can act as a “sort of” and gimped Roon endpoint, but looking to avoid these sorts of issues.

They work but are all limited to stock Android resolution, that’s a limit of roon not the DAPs themselves.

Right, which is another way of saying they are not “Roon Ready” - they don’t act as true Roon endpoints and are a ‘hack’ so to speak. USB Audio Player Pro and similar software is needed on Android to bypass it’s inherent sound library limitations. I suppose for any Android based device to be “Roon Ready” it would need the equivalent Roon software ‘side loaded’, but of course the current software from Roon available for Android is a UI to control the core and does not enable the device to be an full RAAT endpoint…

No that’s not right at all. There are Android builds for roon which give a full end point using RAAT so they are roon ready and can be grouped with other RAST endpoints
However…the Android client plays to the Android system audio which is limited in resolution.

Well, perhaps I am not groking what “Roon Ready” officially means. If it is one sided, such that default Android is considered “Roon Ready” as an endpoint (input into Android device) but still resampling on the output end, then what I am looking for is a DAP that is beyond mere “Roon Ready” - one that is ‘bit perfect’ and not inserting its own sound files between Roon and itself. Does that make sense to you? Do you know of such a DAP?

There isn’t such a thing.