Is anyone else seeing these weird diagonal pixel issues when looking at an album?

These pixels respond to mouse movement (shorter or longer line of pixels) and seem to come from the process that adapts the background to the album art. 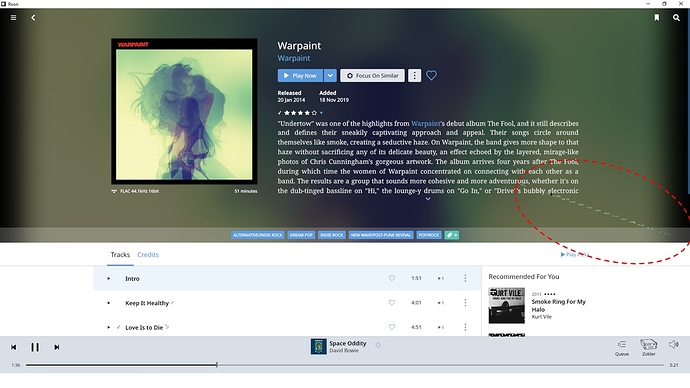 There is a separate thread for the bold font issues, Roon 1.7: the fonts are too bold
and what you are seeing (with the pixilation) could be helpful. Would you help them and give them that information there?

Hi Scott, thanks for the tip on the bold-text subforum. I just noticed there are already some good descriptions and nuanced suggestions listed there. Don’t think I can add anything to that.

I think this pixel error is unrelated to the bold fonts. It seems to me like a separate issue and I haven’t seen anyone else report it. For now I’ll leave it here to see if there are more people that can replicate it (it could be a GPU/driver thing specific to my pc, though I doubt that since I have no other issues).

Add-on: it might be relevant to state my system specs. I currently use my desktop as Roon-core (dedicated NUC is still waiting to be installed), it’s a fairly common build: AMD2600X, Radeon RX580 running Windows 10 (up to date) and latest Radeon drivers.

it could be a GPU/driver thing specific to my pc

I suspect so. But if there are 100,000 users and 0.1% have your hardware, there are 100 users with the problem. You’ve raised the issue which is the most important thing.

I have split your post out of the feedback thread so that we can take a closer look at this issue separately.

I had to remove your additional feedback that does not relate to this issue when I split the message out, so feel free to make another comment on the feedback thread with the other info.

Does this issue occur for multiple album screens or is it just for the Warpaint album? Can you reproduce the issue each time on that same album? Is the behavior if you reboot your Core?

Thanks for helping out. I’ll describe the issue a bit more in detail…
What I see is pixels dancing around in the Album view. They are in the area where the album art is converted into a background gradient. When I move my mouse pointer over songtitles (clickable), they apear/shift/disappear. Mostly they form a diagonal line in the lower right part of that area. Sometimes it is also little clusters of pixels in other parts of the screen, but always in the coloured background. They have the colours of the background gradient, but they are are mostly a lot lighter and therefore they stand out.

It occurs for every album I view (exact same behaviour). It persists after a pc reboot and when only the basics (Windows processes and anti-virus software) are running on my pc.

Just to be clear: this issue doesn’t really bother me. I mainly wanted to point it out so it can be fixed in a later release (in case it is a more general driver-software conflict or maybe a programming mistake).

Currently the Roon core runs on my desktop. It’s a pretty common system: CPU AMD2600X, GPU AMD Radeon RX580, Windows 10 (current), Radeon drivers (current).
Don’t think the rest of my setup is relevant, but to be complete:
I use a wired connection with a SOTM SMS200 and a Bluesound Node 2. My router is a Fritzbox 7590. My library is mainly streaming audio (Tidal) and a tiny bit of local files.

Little add-on. I was trying to figure out where this behaviour comes from… It doesn’t seem to be the specific process that generates the coloured background image next to the album cover. There is a bit more going on…
When I click the album cover, I get to see a blow-up of that cover and the same line of pixels now moves to the bottom right corner of the screen and takes the colour of the Roon interface in the back (grey/white). In this view there is no background filling going on. It is just the basic white and grey Roon interface in the background with a grey-out effect on top of it. Still these pixels radiate from the album cover. Since there is hardly anything clickable in the screen, they stay in place. When I hover over the cross icon, there is a very minor change in these runaway pixels.
Example (error is in the bottom right part of the screen): 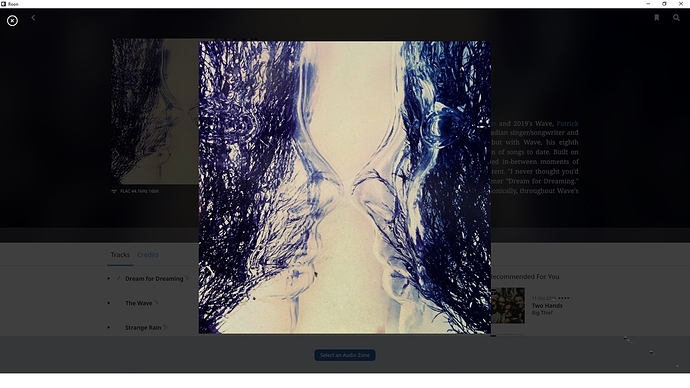 Thank you for providing these additional details, I appreciate it! I plan to discuss your report with our QA team to check what other information could be useful to be gathered for this specific issue.

I appreciate you bringing this behavior to our attention, and I will be sure to let you know once I have further feedback for you. Thanks!

Thank you again for your diagonal pixel report. I have been discussing with the QA team and we would kindly like to request some more information here:

@noris Sorry it took me so long! I’ll answer 1 and 3 immediately and come back for #2 within a few days.
A1. Windowed mode had a very interesting result… When windowed, the entire effect dissappears and everything looks fine. When I switch back to full screen it stays gone. Only after restarting Roon it appears again.
A3. There is also a response when I hover over items in the lower bar (for example: ‘select an audio zone’) or items in the ‘recommended for you’ sidebar.

Thanks for the additional info, appreciate it! Whenever you have a chance to provide logs, that would be useful in helping us narrow down this issue as well, thanks!

We’ve recently released Roon 1.7 (Build 511) which includes changes that should improve this behavior. Please give it this a try and let us know how it goes!

Hi everyone! We are going live today with one last maintenance release before we bid farewell to 2019! Now Playing and Media Keys on MacOS The biggest change in this release is overhauled transport controls on macOS. On macOS High Sierra (10.13) or newer media keys for play, pause, next, and previous should work automatically (as they do with Music and other apps), and this includes media keys exposed on the Touch Bar. Roon will also no longer require users to set accessibility permissions on…

Took a quick look: it’ solved! Quick work :). I checked the now playing screen and the album art blow-up, both were ok. Felt a bit more polished overall, but that could also be my imagination…

Thanks for letting us know the changes helped here, I hope you have a continued enjoyable Roon experience!