I have been searching (and saving) for new speakers for several years. Last year I tried the B&W Formation Duo at home but decided against them because they were difficult to integrate into my system.

Now the Buchardt Audio A500 have been released and I have had them for a week. They are very impressive with all sorts of DSP magic that gives them an amazing bass response among other things. I was ready to stop the search for new speakers and be satisfied but I had to scratch an itch before ending my year long search – an itch called Genelec 8341. They or the 8351 have been on my wish list for a long time. So before committing to the A500 I was lucky enough to borrow a set of Genelec 8341 from a local dealer.

So now once again the kid and wife are out of town and I have the weekend comparing these babies. 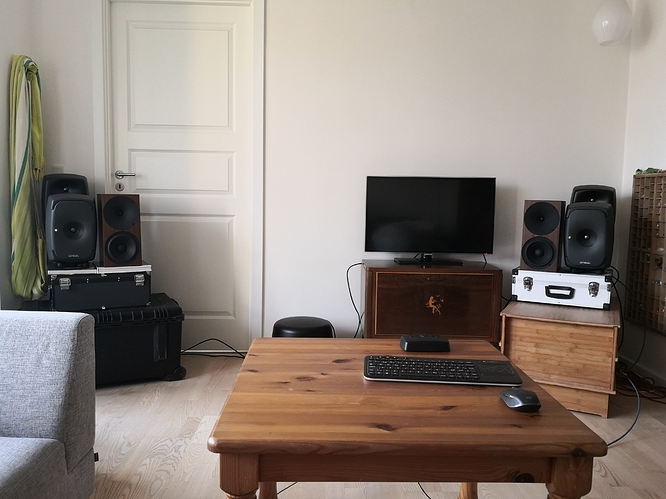 The A500’s have a very deep bass. It’s nice soft sounding but still tight. They have DSP compensation when playing under 70db that raises the bass to compensate for human hearing being not all that great hearing bass at low volume. I don’t have the science reference for this but I’m sure it’s out there somewhere at the “Shut up and play the music University”. The A500 also have room correction to tame all that bass (and jazz) and it works reasonable well in my room.

The Genelec 8341 is of course a near field studio monitor with coaxial design. I have been reading about this design for years but never actually heard them before. I now think I finally understand the concept of imaging. It’s very easy to hear the different layers of the mix voices, instruments ect. with these speakers even at 3 meters. And it’s stable even if I crank the volume up to uncomfortable levels. By comparison the A500 gets in to trouble at very high SPL. I don’t really need that high SPL but it’s impressive that the Genelecs are able to do it.

So now I have the weekend to enjoy these two incredible sets of speakers and decide between them. Help and input from the Roon collective would be much appreciated.

I wouldn’t mind waking up on a deserted island with any of these speakers. Provided of course there was also a low jitter music source available… and a volume of “how to build a boat in ten easy steps”.

The Buchardt look much better!
Thanks for sharing

Yes they have their looks going for them. I like the idea of “old” looking speakers stuffed with the latest technology. It’s difficult to love the looks of the Genelecs even though the design have grown on me.

I been listening more to the Buchardts and the Genelecs and I’m starting to realize that this is not a question of which is the better speaker. It’s more a question of what sound profile fits me. This does not make the choice easier:)

The Genelecs have more detail. I can hear small micro details around voices or strings and where they are placed in the room. The Buchardts have a more uniform soundscape that’s very easy to like. Switching between the two I find that there is an exaggerated bass when going from Genelec to Buchardt. Going the other way I find the Genelecs sounds a bit thin. This also speaks to A/B testing not always being the most useful way to evaluate a speaker. I guess this is in some way a typical pro audio vs Hi-fi dilemma.

On the technical side they both have room correction software but the Genelec GLM is way more advanced with endless tweaking capabilities. I like this aspect as it gives me a possibility to tweak even if speaker, amp and dac are now locked up in the same box. On the other hand I think I need way more knowledge to know what I’m doing because it’s advanced. The Buchardt room correction is almost plug and play though they will add more tweaking possibilities later.

I have never had so much enjoyment agonizing over something

What the hell, keep them both.

Tell your wife it’s the new quad system. And, of course, with the usual 50 percent price discount.

The more micro detail of the genelecs - is that due to less ditortion? Or is the treble tilted up compared to the Buchardt on the frequency response.

I think the micro detail comes from the coaxial design of the Genelecs. All sound emanating from the same point source and the front of the speaker beeing one big waveguide means more direct sound instead of reflected sound.

Great comparison! Have fun!
I would consider the “fatigue” criteria for long sessions. Sometimes more resolving is more tiredness.
Let us know

There is also the comment from @J.D that his new Genelec 8361A has even better mid range detail than the Dutch&Dutch 8c he had before.

I asked @J.D this question in another thread and he was kind enough to reply: Both speakers deliver the best sound for money ive ever heard. They actually (to my ears) sound very alike. Transparent with a tweeter that never becoms to harsh . Genelec 8361A has a slighly better soundstage due to the coaxial design. The midrange on the 8361A is also just a bit better , more open , clearer. Both speakers are really good, but you need to integrate them to the room via DSP . They become twice as go…

That’s great to hear. The 8C is sort of the ideal dream speaker for me but way out of my budget range.

Hi @TreeZorro can you comment on the different A500 master tunings? Is any of those work best in your scenario?

I tried the standard 2.5 tuning and the 2.5 tuning with forward midrange. I prefered the first one. I didn’t notice a very big difference in my setup. I did not try the nearfield tuning.

I have now returned the Buchardts and decided to buy the Genelecs. Both are great speakers but the low end on the Buchardts was too much for my room. It excited the room in a negative way even with room correction applied. The Genelecs doesn’t go so low so mayby its easier to control. But the bass was very tight after GLM (the Genelec room correction) and more detailed.

The Buchardt hub uses a RF remote that doesn’t integrate easily with my Harmony setup. The Genelecs fits with my DAC for now until the time when I can buy a miniDSP SHD studio that has AES out.

Slightly off topic (sorry, new member), but what color are your Genelec’s in the picture you posted? I want to buy a pair of 8341A’s but can’t decide on black or gray. I really like the color of the Genelecs in your picture. However, I can’t tell if it’s black or gray in the shadow of the room.

Mine are grey. I was pretty sure I wanted black but the test pair I got was grey. I liked that they didn’t seem so monolithic so went with grey. The grey were also about 230€ cheaper.

If you look closely you can see my old Genelecs in black behind on the wall.

Question: I am hoping to do a similar comparison, but I can’t find a retailer with a clear return policy on Genelecs. How did you demo yours? Thanks!

I had the Buchardts with their 45 days return policy and then I contacted Genelec Denmark and asked if there was any way to demo the 8341. They referred me to a local pro dealer who had a test pair and was willing to let me borrow them for a week.

I don’t know where you are in the world but I would imagine that many pro dealers have test/demo pairs that they are willing let you test. Especially if they sense you are close to a buying decision. Anyway I really recommend listening to them at home and playing around with the GLM software.

Thanks TreeZorro! I am in New York, and I just put in a query with B&H, but I don’t have high hopes. Is there any other place in the vicinity you would recommend?