And, crap. This is a NUC6 solution, which I assume still suffers from the dreaded driver issue that truncates 24 bits to 16 bits at 192KHz. That is the catch 22 - yet again. As far as I can tell, that applies to the NUC7s as well. I can confirm that I DO get 24 bit 192 KHz out of the HDMI on my NUC8i5, which is why this one caught me off guard. Note that I have only tested 2 channel for this, so far, not 5.1.

So, back to no good solutions to this common use case. I’m not going to spend $400 on a NUC8 solution for this. Crap. 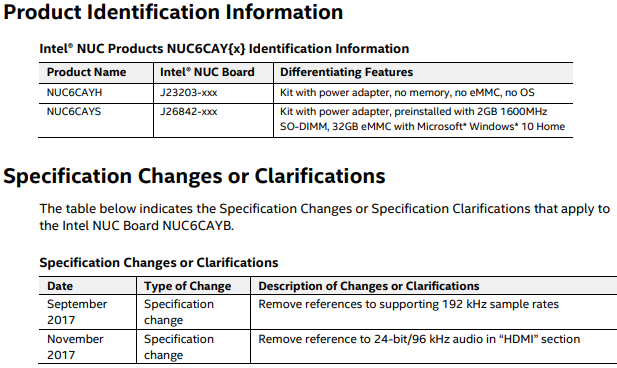 It’s clunky - needs fiddling with each time to make it wok but sounds similar to the same music played as a disk on an Opp 105. Once it’s working it seems to be stable and play all evening without issue.

However I find that it is so much of a faff that if I am entertaining guest for example, I just put a disk into the Oppo rather than fiddle about on the computer!

I found that even an Auralic G1 will not drive the Exasound DAC in multichannel, you have to get the Exasound Streamer - Playpoint.

I am just catching up to this thread. I’m trying to reconcile the 192/24 and multichannel issue as now presented, I.e. that the older NUCs can’t do it despite Intel’s original claims for the opposite. I see in another thread that @eric from Roon Support claims that if you install ROCK on these older NUCs - the ones where the Intel driver is the problem - that you CAN in fact get the required high res and multichannel audio support. Can Roon Support confirm this in this thread to help others? See here: 192/24 over HDMI Not Supported on Intel NUC7 series; Can ROCK Help?

As I posted previously, I bought a NUC6 Celeron even though it wasn’t on Roon’s official ROCK list because many people told me that when using just as a Roon endpoint, these lower spec’d NUCs were just fine vs needing something higher powered to be the CORE.

My experience with the Mac, Roon and HQPlayer is that all is good as long as the Mac is only streaming through RoonBridge or HQPlayer NAA. WIth Roon or HQPlayer on the Mac there is too much competition between the apps, the Exasound Asio interface requires quite a lot of CPU to stream at 8x384kHz.
So put Roon and/or HQPlayer on another machine is my advice.

I have a NUC7i5BNH it is currently running ROC as a Roon endpoint and it streams multichannel 192/24 over HDMI just fine. I previously had it configured running W10 with Roon running as an endpoint under windows. In this configuration the intel windows driver was limiting the HDMI multichannel streaming output to 176/24.

Thank you John. So maybe I misunderstood all the fuss. Why are people so bent about the NUC high res audio via HDMI then? Or is it just that Roon has its own driver system which bypassed this issue completely?

Question: I am running a NUC6CAYH for my endpoint. This says it supports ‘Intel HD Audio Technology’ which I read being 24bit and 5.1 compatible. So one generation behind your NUC7. Do you know enough to help me confirm that I should be good with the ROC install for my endpoint? Thank you @John_Winterberg

Update: this thread seems to imply that all of this NUC 192/24 business is about when Windows 10 is installed only? Hence ROC allowing for this to work when W10 does not? https://forums.intel.com/s/question/0D50P0000490S6sSAE/nuc6cayh-not-supporting-hd-audio-19224?language=en_US

Nevermind. I hooked it all up and my NUC works beautifully as a multichannel Roon endpoint. I really have to credit the Roon team as it was as simple as plugging it into the HDMI, connecting the networking, and my Roon Core found it and I configured the Audio setup in settings.

So @James_Blessing - your concerns are resolved. You can buy a NUC6 like mine for a little over $100 and your good to go. You need to run ROCK on it vs Windows 10 but not sure why you’d want Win10 anyway as ROCK is likely more stable as a always-on Roon endpoint.

Hey, thanks Michael! Can you confirm the bit depth and data rate you are able to get in 2 channel, and in multi (5.1) channel? As I understood it, the issue was not that it would not work at all, but that it would not support true HD audio due to Intel’s implementation of those NUCs (not MS Windows), maybe because of the chipset. The reference regarding that limitation was from Intel, not for a Windows driver, though they also said Windows was the only supported OS, so, maybe… Anyway, it would be great to get confirmation that the issue is really only with Windows and that ROCK outputs full 24-bit, 192 KHz, multichannel data on the HDMI port!

Yes, the issue is that for some incomprehensible reason Intel limits their W10 driver to 176/24. ROC uses the Unix/Linux drivers that are good to 192/24.

I cannot speak as to which NUCs are compatible with ROC other than the 7th gens that I use and Roon indicates support for.

I can confirm it is running 192/24 in both stereo and 5.1. As John pointed out, it’s Intel’s driver issue in Windows. If you read the thread I posted earlier you will see that older versions of the Windows driver work at full resolution. It’s only the recent drivers that degraded the audio. The hardware is fine as it should be since the hdmi spec supports the higher res audio formats. So get a NUC6 and you should be good with ROCK installed. Or get a NUC7+ if you want Roon Support.

Well, that’s it then! I want less expensive, but effective. Your experience and report says NUC6 to me! Time to shop…

Hmmm… OR, get another of what I have to have as back-up/spare for the core? Nah.

To clarify, Roon DOES support NUC6 (and even NUC5!) boxes, as noted in the official support list:

And yes, you could get away with less RAM and SSD but I might repurpose the NUC someday so wanted a bit more storage. I think I recall it being hard to find M.2 drives much less than what I got and the ones I found weren’t much cheaper. I would absolutely NOT use an SD card for main storage. Not reliable.

I did have some issues with the whole system when I put the new unit on the network, involving a lot of resets and restarts. Several times, ON EACH CONTROL DEVICE (iPhone, tablet, computer), Roon just stopped and required me to log in again! I couldn’t browse to it for setup for the longest time, even though everything else worked: updated ROCK version, copied CODEC file to it as a share from my PC, configured the audio devices and played them… But even that access seems to work now. All this extra complication seems to be about license for only one Core, and confusion about which Core I wanted, over, and over.

@Support, it would be really great if you released a cut-down ROCK without Core/server capabilities to avoid all the complications of two (or more!) on a network, and in so doing maybe get the RAM requirement down to 2GB? Also, with no database to handle, could it just use an SD card (16GB?) as the boot drive? If yes to all of these, you’ll have the best available remote end-point for multichannel HDMI (and USB), for about $150, total, enabling more, and better, use of Roon.

I think they already have. It’s called Roon Bridge. I use the Bridge on a Mac Mini as a Roon endpoint feeding an Oppo 205 via HDMI and the Oppo into my AVP via HDMI for 5.1 CH music. I had no issues with setting up the Bridge on my network. In fact, I have several Bridges running without issue. I suspect your problems were related to trying to run two Cores on the same network. Roon is restricted to one active Core at a time per network.

Yes, Karl. Roon Bridge. I think many of us started with that idea, but ran into various problems - catch 22s. The goal is not another full PC and OS, but more of a network appliance to enable delivery of the digital stream from the Roon Core to remote points in our networks. There are MANY topics on the issues with various devices for this, especially for multichannel, hence this topic.

Roon ROCK is close to an ideal solution. As you say, the issue is complications from a second “Core” on the network, but as all the posts above indicate, it is permitted and works. You just don’t try to use both as Cores. SO, a stand-alone Bridge on Unix, with USB and HDMI audio outputs is the goal. Maybe “ROEP”? Roon Optimized End Point? It seems like a ‘relatively’ small task given that ROCK works, but has unnecessary (undesirable) components included, which might be (easily) eliminated. AND Bridge exists - it just wants releasing as a standalone install on something like a NUC, like for ROCK.

I have to use my Brix HDMI -> AVR for an Endpoint and Core.

Stream from there to my Chromecast on my HiFi for Stereo.

You lose DSD for 2 channel though.

DietPi is very easy to install on an x86 machine. Doesn’t require any Linux knowledge, as easy as installing Rock. RoonBridge can be installed with dietpi-software command after installation. Then forget about it.