Not seeing all Tidal albums for artists

This has been discussed before and I still randomly come across issues where Roon is not pulling all the albums from an Artist. Today I searched for Hailstorm and only got a few albums only to find out Tidal is displaying more albums. This is the very basic function that Roon should be able to do without issue. What am I paying for? Some of the albums? Some of the medadata?

What are you missing? I just searched in Roon and via the web interface and they match perfectly (1 album, 1 EP/single).

It is hit or miss when it comes to searching artist and to expect all their albums to appear. This has happened a few times and I then Have to start digging for them by actually searching for the actual album and then it comes up. It is so frustrating that Roon does not find these on its own just with a simple artist search.

You mentioned this artist, specifically. What are you missing? They are perfectly synced.

You are missing the point. When I first searched for Hailstorm none of her Reanimate the covers Ep showed. I had to search for these albums then I had to like them for them to show up under her profile. This has happened to me with other artists. This is unacceptable.

You are missing the point.

No I’m not, you said

I looked and both searches come back with the same thing.

So I asked you to provide an example and you haven’t. I honestly don’t know what you’re moaning about.

Roon have said that depending on release time, there is sometimes a circa 24 hour lag before new Tidal releases hit their metadata platform, because they scrape data on a regular schedule rather than real-time.

Spare me with the moaning comment. I am a paying customer and I have every right to complain about the service. I should not have to dig to find albums I am not already aware of. This has nothing to do with lag time of release albums. You obviously were not listening when I said if I searched the album in Roon it appeared. I should not have to dig for albums as they should automatically all come up in an Artist search. They were obviously already in Roon but for some reason Roon does not pull up all the albums in an artist search. Very disappointed.

I said if I searched the album in Roon it appeared. I should not have to dig for albums as they should automatically all come up in an Artist search. 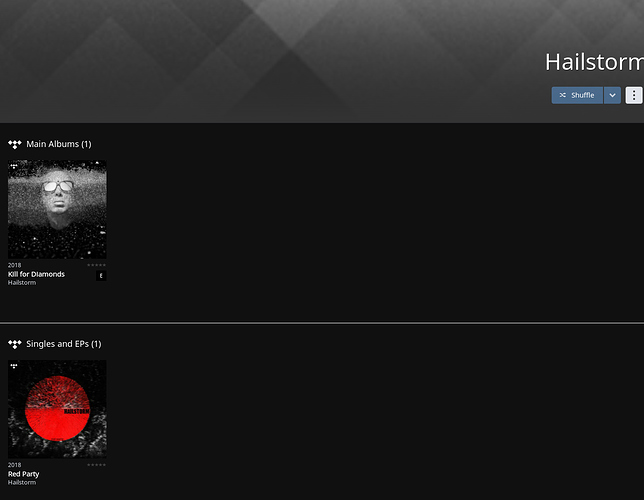 My apologies on my spelling. The band is Halestorm.

Are they missing or just mixed between album and EP? All nine Tidal albums that I can see are also in roon.
It looks like roon is using the allmusic guide as to which are Albums Vs EPs.
I can see one obvious error in that ReAniMate 1 and 2 are shown as versions of 1 rather than separate collections.

My apologies on my spelling. The band is Halestorm.

OK. Again, there isn’t anything missing. Roon is consolidating the versions that Tidal is showing as split, e.g. 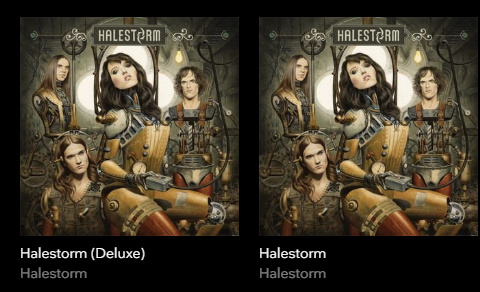 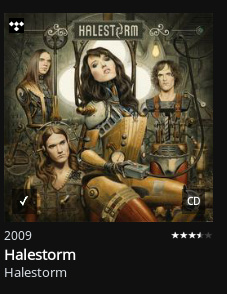 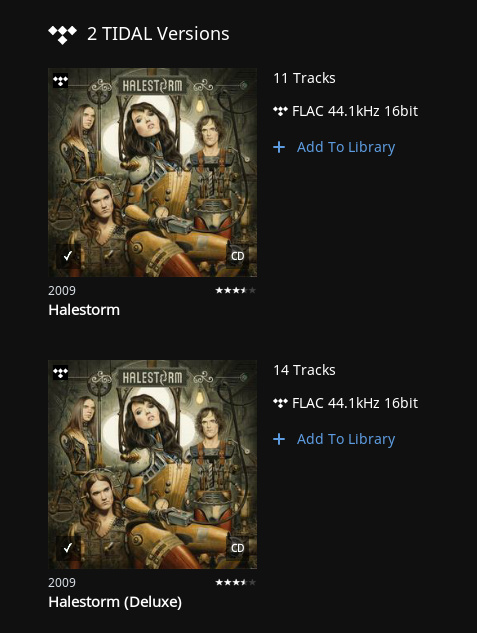 I am not sure about the mix of Main albums vs EP since I already search, liked and added them to the main. That is a detail I will look more closely at the next time. 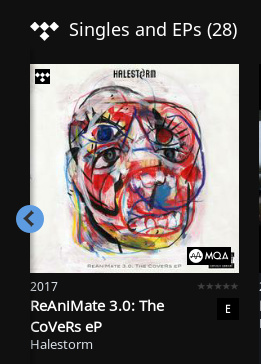 Correctly labelled as an EP in Roon 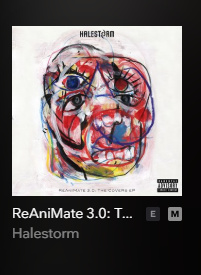 Incorrectly labelled as an album in Tidal

I hope this was my error in not viewing the singles and EP list more closely. I tend to look at the Title main list.

I’m new to Roon and I’m having the same problems. I searched for the Norwegian band, Soup, and on tidal there are 7 albums and a number of EP’s and singles while on Roon only 3 LPs. Likewise a search for Genesis was missing pretty much everything before A trick of the tail. The albums are there and I can find them if I search for them individually.

2 posts were split to a new topic: Elton John TIDAL album not showing up

I posted this - didn’t realize it was split. Think it belongs here:

Well, Roon is SUPPOSED to do this, and in most places I think it does a good job of it. There is some bug, very hard to identify and reproduce because you have to fix the issue to confirm the problem. Basically, I believe that Roon has a glitch in its integration with Tidal in that it does not display Artist search results if that artist isn’t already in your library as a primary artist. Once you find one album by that artist and add to your library, then Roon downloads whatever metadata that…

That said I just tried Soup which isn’t in my library. Worked and showed albums, not compositions. This is an intermittent thing and I can’t see a clear pattern yet. I just know that I’ve looked for artists well represented in Tidal without albums being presented by a Roon search.

This has been bugging me since day one and there has been no fix nor has Roon addressed this issue.

One other place you can find more albums that don’t show up under the Tidal Main Albums is the next catagory down which is Singles and EPs.

And if you know it’s an issue you can apply a bit of extra effort to get there. Find a way to get to an album by that artist and add it. Then more should pop. Weaving through compositions is one possible way. It’s just a weird one, hard to pin down.

So here is yet another album I see on Tidal but not in Roon (Tidal) The Verve / Urban Hymns (Deluxe/ Remastered 2016. I only see the remastered version in Roon. Please someone from Roon explain why this is happening and this is not a current album.