Same problem here. See screenshot: the album is playing fine on ‘Biljart’, but ‘Nothing playing’ in the now playing screen, unable to pause, but able to e.g. see the signal path. 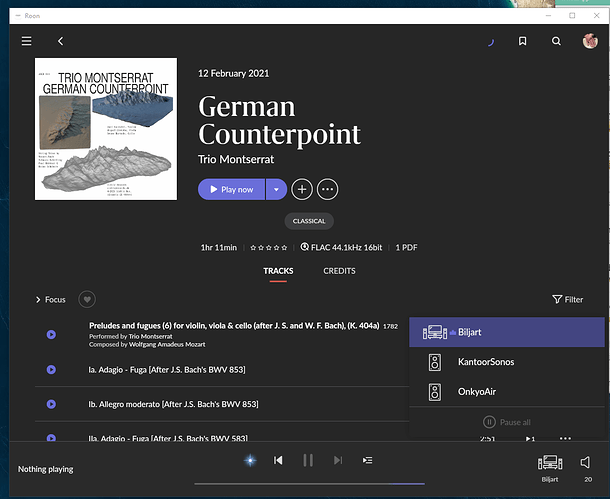 Is this happening on all remote devices?

“Nothing playing” when there is content playing. On all remote clients (Windows, iOS, Android), rebooted all items several time, tried disabling the Windows 10 firewall on the core machine (exception rules for all roon parts are active), to no avail. → similar to this: 1.8 Serious ‘Now Playing’ error - frozen on previous track(s), - Support - Roon Labs Community // Maybe related to the issue is this: When I reboot the core, it sometimes takes several minutes before it finds all the audio devices, sometimes it finds none, sometimes one, sometimes all, but after x time they all appear and are playable, but it is not instant as before - however in setup - audio the devices are always visible and activated, just not always selectable for playing). (The ‘Displays’ are also empty, even the Web display just shows the roon logo, nothing else. → same issue as this user No audio devices found new issue since 1.8 - Support - Roon Labs Community)(-> same issue as these users Seeing no audio zones to select, 1.8 - Support - Roon Labs Community)

Ethernet (core to router: Asus RT-AX92U, and to all audio endpoints)

After re-starting Roon on Core, these functions are come back.