Roon Radio with Qobuz not as good as with TIDAL

I have had Tidal since it launched and added Qobuz to Roon when they added it and I have generally added versions from both to my Library. So have been running both in Tandem for a while. I decided it’s time to ditch one service as Qobuz has caught up somewhat and only a few albums were not available and it’s cheaper.

Roon radio when I had both worked extremely well, very varied sessions and rarely going back to the original seeded artist lots of new discoveries. Since switching to just Qobuz it’s gone a bit meh! Limited choices coming up and a lot of repeated artists and albums.

So does the choice of service affect Radios choices of tracks with the exception of its not available on that service obviously. My library is essentially the same I am seeding from the same material yet now it’s getting less than stellar results. Is this because Tidal has just a much bigger library? Is it just not matching in Qobuz down to poorer metadata or is Radio only comparing to other Qobuz users now rather than the full user base across both platforms.

@brian is this the way it’s supposed to be?

Have you tried testing it by choosing a seed that you had used previously? And then comparing both outputs in History?

I will try that and see what happens.

Hmm still the constant repeating of artists and the same albums for them. This is getting a bit tedious. Looking back at play history never really done this much it shows far more tidal songs in radio than Qobuz and is far more varied. So there is something going on here with Roon and Qobuz. Maybe Qobuz users are are bit less prone to listening to this style of music. It’s only since the absence of Tidal I can really see and hear the difference in the quality of Roon radio from one service to another.

This really is getting tiresome, doesnt matter what I seed from Radios choices seem to be imited to a limited set of artists which its repeating all the time. Boring!!!. Definitly an issue with Qobuz just for radio I know see why Radio has been getting a lot of flak.

Seeded a track I had played when I had both services within 4 tracks it’s playing the same artist again and then another repeated artist/album straight after. Previously no repeats in over 12 tracks likely would have been more if I had not played another album. All the same tracks are available in Qobuz so something in the way Roons choosing them is very off. @support would like some input here as this is far from a good experience. What’s causing the lack of variation?

Heres the history seeded from Moloko track “Over and Over” from when I had both services, you can see a heavy bias here towards Tidal .

And here it as with just Qobuz.

Now on another leftfield track from the same album. So broken it’s unbelievable. Making me really regret ditching Tidal.

I’m not seeing the repetition you saw @CrystalGipsy.
I started with your seed from Moloko and have played for ~three hours. Moloko played the seed and second track (different album) back-to-back. Goldfrap, Portishead and Massive Attack also appeared twice, but about 45 minutes apart and different albums. Only one track from Leftfield. I saw several of the artists you also list on your Tidal example.
I also got Bjork, Daft Punk and The xx is playing now…

Got non of that as you can see all I got was Gotan project, massive Attack and Leftfield repeated. It’s been like this for everything so far it’s driving me nuts. There is no explanation for it at all as it was far more varied when Tidal was in the mix.

Ok I decided to reboot everything and clear all play queues. Started a seed from an album by BC Camplight and it’s now seems to be working as it should from this. Varied only one repeat artist in nearly an hour. Will have to perform some more tests. Very odd I wonder if it got stuck to playing library tracks only, but then it played from Qobuz not local music.

I’m glad that things are working properly for you now. If you see this problem occur again please let us know if you notice any patterns that seem to lead to this. We’ll be happy to take a closer look at what’s happening.

I will not used Radio today but will try and use my original seed and see what happens.

Hi @dylan got another session that’s playing the same artists

So far it’s played 5 tracks all from the same two artists, different albums though. But still hardly mixing it up. I imagine it will follow this pattern. Seeded from the Dean & Britta Track

Seeded from the Dean & Britta Track

I disabled TIDAL and tried to seed this Qobuz track on my end and I’m seeing something very different than what you’re seeing: 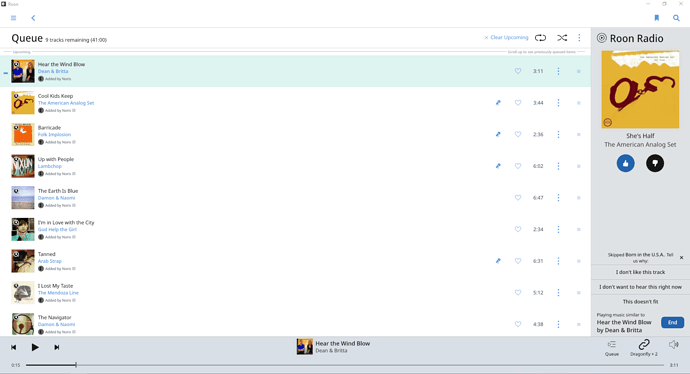 Very odd I wonder if it got stuck to playing library tracks only, but then it played from Qobuz not local music.

Did you see any “Limiting Roon Radio to Library” messages appear?
Are you able to reproduce this behavior from a non-mobile device as well?

Ok I decided to reboot everything and clear all play queues. Started a seed from an album by BC Camplight and it’s now seems to be working as it should from this

Are there any patterns to the behavior you’ve noticed? Any set of steps that we can use to try to reproduce this behavior on our end?

No I didn’t see the limiting message pop up. Not sur what you mean by mobile device this Is my core as endpoint feeding my dac. Mobile was just the remote control. But I have had the same behaviour using my pc as remote. If that’s what your asking?

Not sure if I have noticed a pattern other than from time to time Roon does seem to slow down and doesn’t retrieve album info often can wait for a minute and then its fine again. During this period there is no internet loss music is streaming, others watching streaming video , DNS is working fine it’s just Roon. I have reported this on another thread where another user is having same issue. So perhaps this is related. I have been using Cloudflare DNS before you ask me to switch, DNS server choice makes no difference to issues with Roon in my case.

@suppor It appears I am not the only user to notice this when just using Qobuz.

Is Roon Radio working better than ever since the outage? Roon Software

Not sure if I’m imagining – since restoration of Roon Radio service from yesterday’s outage, it’s giving me much greater variety than I’ve experienced over the last few months (playing from Qobuz). I haven’t had a single repeated artist today, whereas previously repeats would start within 15-20 tracks, as other threads have discussed in detail. [EDIT: And this was before today’s Build 710 updates] Anyone else have this feeling…?

When I had a local library radio used to play lots of the same artist, however I transferred all my albums as favourites on Qobuz and disabled my local storage.
Roon plays a good selection now and I’m not seeing tracks from the same artist.
But at times I do wonder how it went from one artist to another.

Are you still seeing the same behavior following the outage?
If so, can you please reproduce the issue and provide a few timestamps of when it occurs?

I haven’t used radio much this week @noris so not seen anything. I was just noting that I am not the only one to notice this behaviour. Will certainly let you know when i do see it again.

@noris I have another instance of Radio just not kicking in at all at end of an album plays completely stopped but as you can see it was ready to play the next tracks no error messages came up.

Thanks, @CrystalGipsy! Noris is having some internet issues today, but I’ll get things together so our QA team can look at the diagnostics report from that timestamp and we’ll be in touch soon.