This seems to be a newly introduced bug in version 778:

On the artist Page and on Discography of an Artist, when you limit view to “Library only”, then only “Main Albums” are shown but no longer appearances of that artist on other albums. This used to be the case until yesterday. Since 778, these “Appearances” albums are all gone. There should be 4 Appearances listed here: 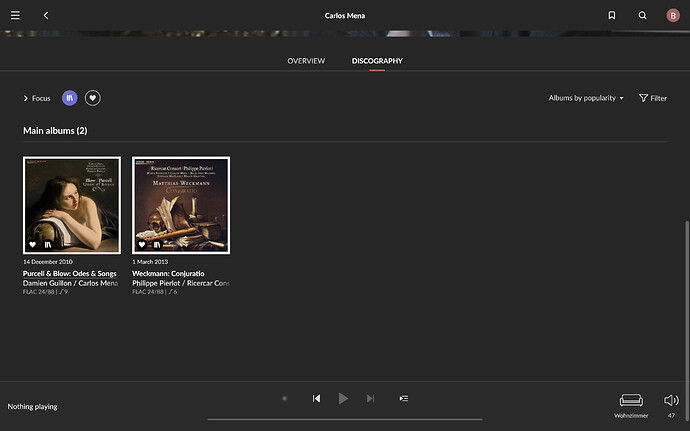 Thank you for investigating

Limit to your library. What happens then?

Well, @Dan_Levy is seeing exactly the same issue as I. I updated description above to make it a bit clearer and added a picture.

Is Carlos Mena present on other albums in your library (than these two)?

Yes, thats the entire point of the discussion

But not as Main artist. He is “just” an “Appearance” in 4 other sets. And he appeared there until I updated. Thats why I took him as an example as I recently looked at him.

Just going thru other artist. The problem is all over the place…

I think you just explained the reason

I’ll do some testing on my system…

I think you just explained the reason

Dont know what you mean. If you refer to “Appearances” they where always listed in “Library only” view - prior to this new bug in 778.

Yep, have it here too.
Strange…

Yep, I made that second album “Main” as he sings virtually all of it

But all those other sets, Matthew Passion, Christmas Oratorio etc, he’s “only” a member of 4 soloists. But of course I’d still like to see those when I look for him! Their in my library for a reason after all…

Dont be so shy

Just checked Christa Ludwig. I got her “Appearing” in douzend albums. If I look at “Library only”: All gone, except for one: Samson et Dalila with Patane. No Idea why that didnt disappear as well…

NB: The reason probably being that she is credited on that one as “Vocals”. On the others she is credited as “Mezzo Soprano” - and she disappeared. Roon maybe does not know what that is since 778…

Something is odd about all that. As @bbrip with Carlos Mena, I yesterday listened to an album with Bernarda Fink. By her I had a few albums in my library, but all being Main Albums. So, today I added the Concerto Köln production of Händel’s Giulio Cesare to my library. On the screenshot from the Home page it shows as the most recently added album: 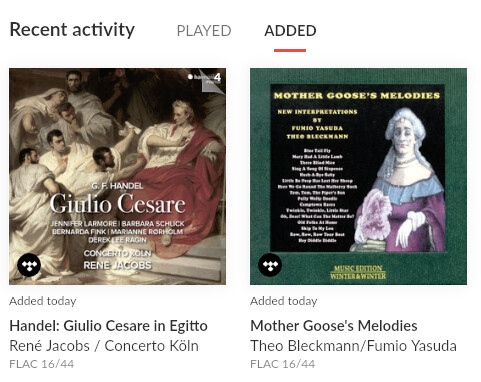 Bernarda Fink is definitely credited on this album:

Now, going to Bernarda Fink’s artist page, on the ‘Overview’ tab I get her eight Main Albums in my library, but as has been observed by others, her appearance on the recently added Giulio Cesare-album doesn’t show up.

Now, on the Discography tab there’s a hint why this may be so:

The recently added album is clearly shown on the ‘With René Jacobs’ section, but it isn’t identified as being part of the library. On the Home page it is clearly shown as having been added to the library, but here, on Bernarda Fink’s Discography page, the album isn’t being identified as being part of my library. So, of course on the Overview tab it wouldn’t show up as an Appearance of hers…

The issue might well be that Roon no longer identifies Voice roles properly. I dont keep opera or Lieder singers as “Vocals”. Thats for Jazz and Pop.

I credit them with Soprano, Tenor, Mezzo, Countertenor, Bass(vocal) etc…

Always worked. Now no longer… as it seems

On my example, all albums are by Tidal, with the default credits as supplied by Tidal/Roon. Be that as it may, I would expect a recently added album to be correctly identified as such when looking at an artist’s Discography.

As shown on the following screenshot, on the artist’s Main Albums section of her Discography, the albums added to my library are clearly marked. But not so the recently added album where she is credited as ‘With René Jacobs’…

I have a feeling that Roon doesn’t correctly identify on all relevant pages and views all items that are part of one’s library.

Unfortunately I do have to agree with the OP on this one, tested it a couple of times and as soon as I select library albums only then the appearance selection disappears entirely.
And this was on some symphonic rock artists of uncommon flavour!
Quite annoying I would agree.
See pictures, in this instance there was only 1 appearance but it went bye bye. 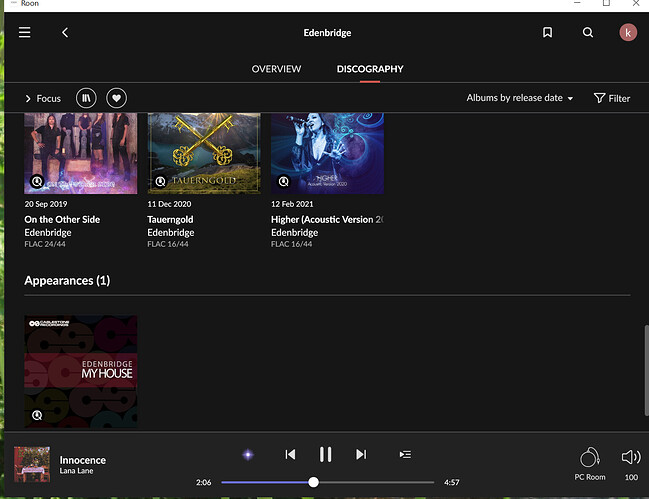 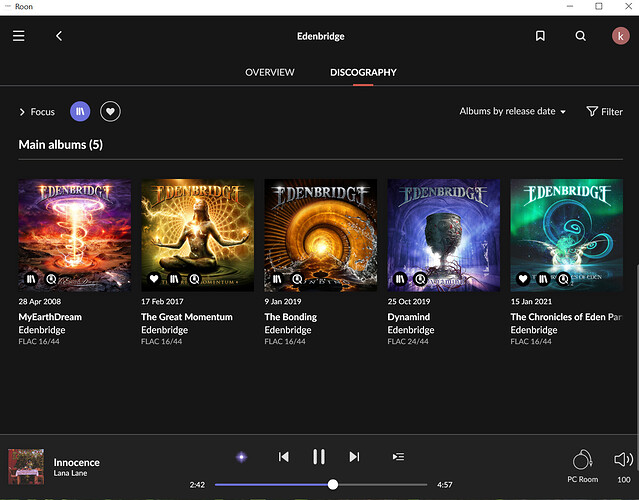 Now, looking at Gunar Letzbor’s Discography, these two album do appear on the ‘Appearances’ section, but are not marked or recognized as being part of my library: 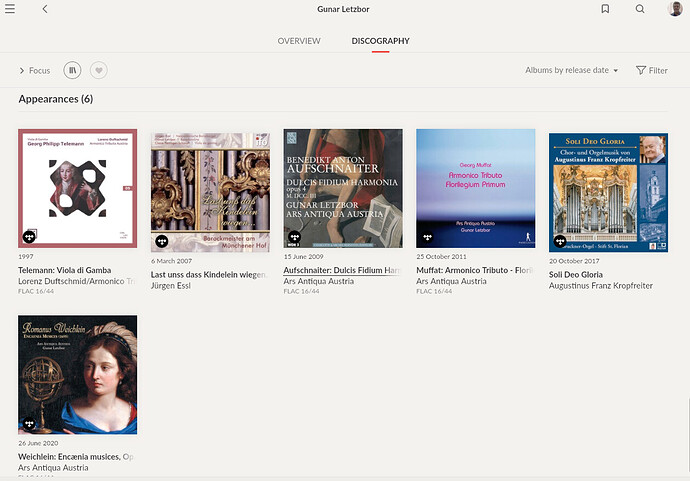 So, if I restrict the Discography to ‘Library only’, of course the Appearances section disappears, as the albums are not being identified as being part of my library. I think the root problem here is that Roon doesn’t consistently recognize albums or items which are part of one’s library.

Having the same issue here.

A screenshot of just one example: Horace Andy’s appearances only showing on one other album, “Protection”, despite him being tagged as a vocalist on all the other Massive Attack albums in my library: 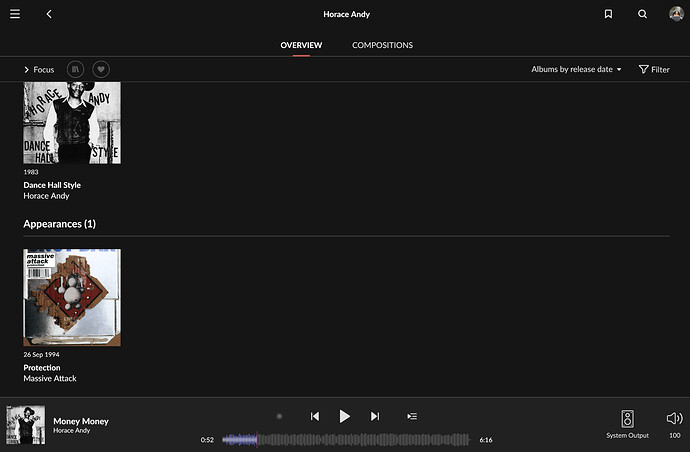