Tidal library not showing all albums for an artist

i have a paid tidal subscription, most artists show in detail via roon, but one artist in particular, marcus miller, only shows having one album in tidal when he has 7 or 8

Just looked up “Marcus Miller” in Roon and found 16 main albums in Tidal. ?

correct in roon under main albums all i see is one 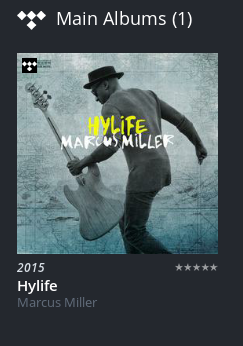 similiar type problem with hiatus kaiyote choose your weapon, i see the album, but only one track is listed 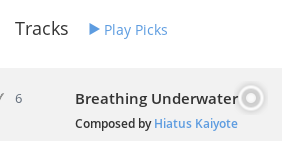 I’d suggest clearing the Tidal cache. That will prompt Tidal to send Roon up to date info.

As said, I’m seeing 16 albums. Is that based on ones location/country? 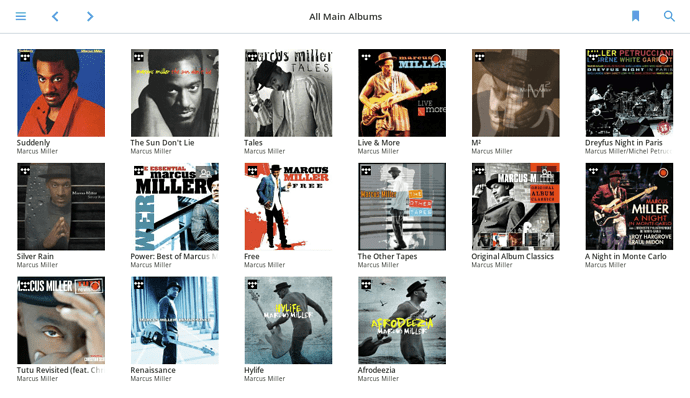 im viewing in tidal…ill see if see your cache works

its not a local issue if i look in tidal separate from roon i see all sixteen albums, if i look at tidal integrated with roon i only see one album 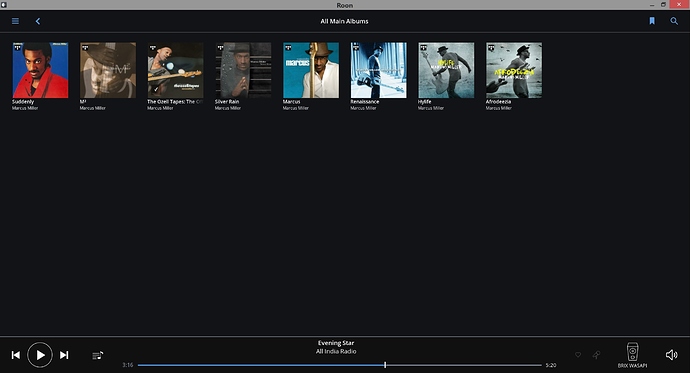 Let’s see if @jeremiah can shed any light on the discrepancy.

Just for the record: 16 albums here.

That’s correct, but I don’t have any Marcus Miller local albums.

When you’re browsing Tidal in Roon, you’re seeing Roon’s Tidal database, not a direct pass through of what’s shown on Tidal – that’s why there’s so much more metadata, like recording dates, lyrics, links to composers, credits, etc.

This is also why Roon can sometimes be slightly behind Tidal when a brand new release comes out – our database is generated multiple times per week, but sometimes a new album will just barely miss the cutoff, and will show up in a day or two.

One of the trickiest parts of building Roon’s database is determining when albums (or artists) are equivalent. Sharing data across different versions of an album works great for your local files, because you get the same deep metadata when you have the standard CD as when you have, say, an obscure Japanese pressing with an extra disc of bonus tracks. And distinct data among the editions (like the remastering engineer) will still be applied correctly.

So with all that said, what you’re seeing here is actually a bug, and one that we’re going to address soon. We’ve seen that in some cases, multiple Tidal releases are being marked equivalent, which means they are shown as a single release in Roon.

While some differences between Tidal and Roon metadata is expected and even desirable (such as when Roon has better data or deeper linking), obviously the missing releases you’re seeing here is not what’s intended, and we have some work in this area kicking off soon.

Roon’s database is built to handle these cases properly, but the underlying data is still generated automatically and sometimes the algorithm needs fine tuning. When we make those changes, we work very carefully, exhaustively confirming there aren’t regressions. I know it sometimes seems quiet over in the metadata section, but we frequently schedule work based on what’s reported there, so if you see something, say something

2 Likes
Albums found in Tidal, but not in Roon
Differences on Tidal between Roon and Standalone
Tidal album not available
Roon: played_empty_swim
andybob (Andrew Cox) December 5, 2015, 12:27am #14

Tidal direct is only showing me 7 Marcus Miller albums so I suspect the disparity in Roon/Tidal between Anders, Rene and I is a geo limitation to do with Australia.

I was looking for the reprise of Wicked Game by James Vincent McMorrow.
Using Tidal I found it immediately but I was never able to find it in Roon!

I have Converting Vegetarians II by Infected Mushroom whose tracks play fine, but clicking the album pops up a message saying the album couldn’t be found.

It is found in the Tidal app though, and there’s a slight variation in naming—Roon stylizes it (erroneously) as Converting Vegetarians, Pt. 2.

Is this issue related to what’s discussed above?

Al Dimeola shows multiple albums in my Tidal view. In Roon I see nothing under ‘Main Albums’. 8 ‘Top Tracks’, one ‘Single’, 14 under ‘With Various Artists’, and 6 under ‘Appearances’, 3 of which are actually his own solo albums. I am not aware of an issue with any other artists but I am fairly new to Roon, so there may be others I haven’t found yet.

Try doing a search in Roon for Al Di Meola. There seems to be two spellings for this artist.

Thanks, Greg. That worked. I can see all the albums now. Unfortunately, I don"t see any way to save him as a favorite artist within Roon, and he doesn’t show up under this spelling in Tidal under his name alone, so I can"t save him there either. Any thoughts?

I think all you need to do is add one album by Al Di Meola to your Roon library, and then you’ll be able to “favorite” him (and all his stuff on Tidal will show up). I don’t think it makes a difference whether it’s a locally stored album or a Tidal album. That’s the way it works for me, at any rate.